Hey, Rafer! You suck, ya jackass!

Share All sharing options for: Hey, Rafer! You suck, ya jackass!

We are only 27 days from the start of the Houston Rockets' regular season (where we host Memphis at 7:30pm that Monday night). Which means we need to re-declare something:

Whew... that felt good!!
For some reason, I haven't felt compelled to say that in a while!

Why now? Maybe it's because John Hollinger agrees with me.

Biggest Weakness: Point guard
The Rockets have four-fifths of a championship starting lineup and a championship-caliber bench. Also, they have Alston. While he was better last year than in 2006-07, he's pretty clearly the weak link in an imposing starting five. Alston is a solid defender and dribbler, but he hasn't shot over 40 percent in four years and opponents feel free to gamble off of him to double Yao or McGrady. Finally, he's 32, an age when many quick guards start losing it.

You see, I'm not the only one who thinks knows he sucks...

Yes, I still say Rafer needs to be traded. The Rockets are going places this year, and I don't want drunky mucking everything up. I'll even risk the inevitable midnight threats from Rafer's mom -- Rafer sucks and we need to get value for him while we can. 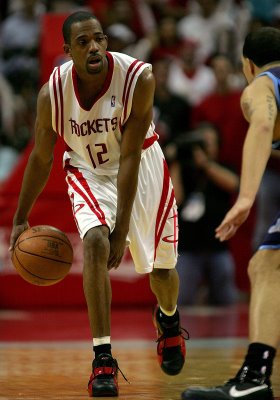 (note: anyone who thought I might have softened my stance on Rafer in the offseason clearly hasn't been paying attention...)