Tonight at 7:30pm CST, the Rockets return home after a quick trip to Dallas to take on the team from the city where Kevin Durant and his teammates now live.  Seattle got hosed and it kills me that the Sonics name will never be used again.  But then again... there's a game to be played.  Here's how they matchup:


This might be one of those rare games where the Rockets have a matchup advantage at every single freakin' position.

PG:  I'm not Rafer's biggest fan.  That's for sure, but he's a hell of a lot better than Earl Watson.  Even if Rafer is shooting only 21% from the field right now.  So long as Rafer shoots less than 7 times, we should win this matchup.

SG:  T-Mac versus Durant.  We are huge K-Smoove fans here... Lee went to UT so his alumni card is revoked if he says anything bad about him.  T-Mac is still a bit banged up.  But Durant is still very raw and is coming off a 5-14 performance to start his season.  Hopefully we won't need Tracy in the 4th Q again.  Just don't let Luther Head play in his spot...

SF:  Everyone saw on Thursday what Ron Artest is capable of.  And that was against a legitimately good team.  The only fear I might have is RonRon getting bored tonight and not playing hard defense.  Because Jeff Green, while not as heralded as KD, is actually quite good himself.  Not an all-star or anything, but I'd be happy to have him on my team.  (Though he'd be like 10th in the rotation for the Rockets.  Damn I love our depth!!)

PF:  Luis Scola going against perennial underachiever Chris Wilcox.  What a contrast in styles.  Wilcox is bigger, stronger and more talented.  Yet Scola is a better player overall.  Kids, it just goes to show you that hustle, desire and effort can often beat pure talent if talent is wasted.  Scola's gold medal in 2004 also trumps Wilcox's championship at Maryland from 2002 (Wilcox benefits from Steve Blake, Juan Dixon and others...)

C:  Yao v. Collison.  Yao played 40 minutes on Thursday, so Adelman may try to hold him to 30 minutes tonight.  Collison will probably foul out in 20 minutes, as he is in reality a PF and way, way undersized against Yao here.

Prediction?  Rockets take early lead and coast in 4th to a double-digit win.  3-0 here we come!  Though I'll be watching just to see the McGrady/Durant matchup.  That should make for some excellent TV time. 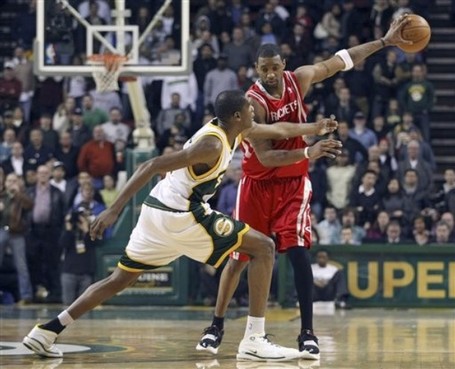 Go Rockets!  (and seriously, "the Thunder" might be the worst team name ever.  If we don't count the WNBA - which we don't.)