I would like a do-over for my entire weekend.  It was not supposed to go like that!

First I get brutally bounced out of a poker tournament in Lake Charles.

Then I wake up early Sunday to go to the Texans game.  Only to watch Sage Rosenfels do his best Luther Head impression (that would be "sucking the life out of your team and the fans by being so awful at your profession").  The Texans end up losing to a rookie QB.

Finally, I watch last night's Rockets game.  Which started out great (28-16 lead after the 1st quarter).

Then Rick Adelman went absolute batshit insane with his lineups and rotations.
And the Rockets got steamrolled. Badly.

Luther Head assigned to cover Trevor Ariza and actually try to rebound?!?!?  What??
Chuck Hayes as the high-post distributor in a ball-movement offense??!?!  What?? 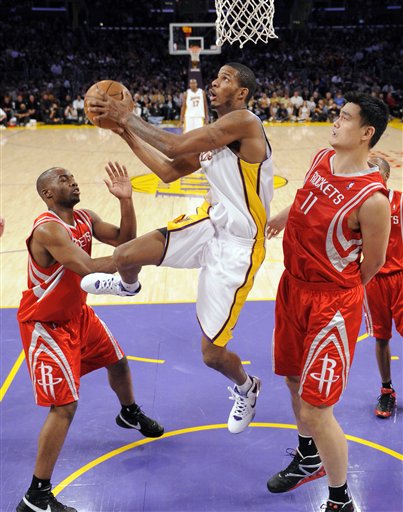 (not pictured:  Luther Head, the guy actually guarding Ariza on this play)

Then again, Adelman's best lineups could not overcome T-Mac shooting 1-11, Ron Artest shooting 2-11, Rafer Alston shooting 3-9, Scola shooting 3-9 and Luther Head having the audacity to fire away 6 times (making only 2).