Ruminations from the bench - by Joey Dorsey

Share All sharing options for: Ruminations from the bench - by Joey Dorsey

the scene:  At the Houston Rockets team hotel in Los Angeles following a 29 point loss to the Lakers.  Dorsey has just made his NBA debut and played 2 minutes.  Joey Dorsey approaches Coach Rick Adelman to share some thoughts he's been having.

Ricky:  What do you want, rookie?

Joey:  A lap dance actually... but that's not why I came here to chat ya up.  You see, I'm a college educated man now and because you won't let me play, I've had a lot of time to think on the bench.

Ricky:  [annoyed] I was under the impression that you didn't graduate.

Joey:  Well, shit, I was too busy to actually go to class.  Besides, Coach Cal told me all that was taken care of.  Hey, wait a second, that's not what I'm here to talk about.  Quit using that Jedi-head-trick stuff on me.

Joey:  I thought we already covered this... I want some of the local L.A. girls to get all up on me and give me my $20 worth.  But, really, I want to know why you keep putting that Kentucky guy out there on the court instead of me.  Why is that, Coach?  It can't be because I'm still workin' on my free throw stroke... cause that guy is worse than I am!

Ricky:  Joey, you are a rookie.  Meanwhile, Chuck Hayes has been an invaluable asset to a playoff team with his defense and other intangibles.  [muffles under his breath] plus he found out about my furry fetish...

Joey:  What do you mean, rookie?  I ain't no virgin!  I've been where no man has gone before, pops - no one else would touch some of those Memphis girls!

Ricky:  [curious]  Hmm, I've never been to Memphis...  no, wait, I mean that you are still learning how to be a basketball player at this level.  It takes time and effort.  If you work hard, you'll be playing soon.  Just look at Carl Landry - I didn't let him do *anything* until January last year, and now he's an important part of our team, and $9M richer!

Joey:  Nine million?  As in dollars?  What does that Kentucky guy make?  Do you pay him in bottles of Jim Beam?  He sure dribbles, passes and shoots like he's been drinking that bourbon all day.

Ricky:  You make an interesting point.

Joey:  At the very least I could have been muscling out that skinny dude on the Lakers who kept jumping over Luther Head's head.  Speaking of - why do you let Luther play?  That guy looks like a virgin - he's all scared and nervous every time you put him in the game.  And based on his shooting, he doesn't know where the hole is either!

Ricky:  But I did let you play last night...

Joey:  Joey needs more than 2 minutes to get off.  If you know what I mean!  That shit just teases me!  Even the girls at Treasures give me more than 2 minutes' time!  Speaking of that place, they keep talking about this "three foot rule" thing.  I kept trying to tell them that I know the Dorsey Fin is big, but it's not quite three feet long!  They look at me like I'm dumb or something!  Why is that, Coach?

Ricky:  I don't even know where to begin.  For starters... if you want to be a professional, you should stay away from Treasures.

Joey:  Why?  Is there a better place for a baller like me?

Ricky:  No, that's not what I meant.  I mean, you should focus on basketball.  Take a look at Shane, for example.

Joey:  No way, Coach.  Battier always wants to watch DVDs of Three's Company.  That show confuses me.  That dude in the show never bangs the blonde chick.  Like... ever.  Nothing happens.  Battier keeps talking about how it makes for good comedy but I find nothing funny about a dude living with two women and getting no play from either of them!

Ricky:  You know, I never thought of it that way before.

Joey:  But back to my point... how am I supposed to impress the ladies if you won't let me play?  Just look at what I'm capable of: 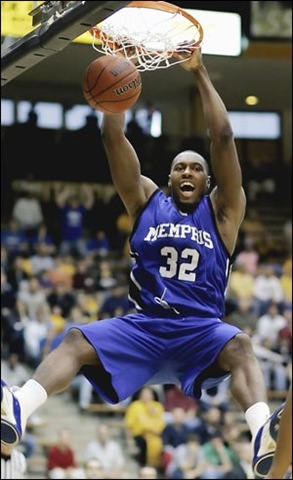 ... I'd like to see Kentucky guy or Mr. Potato Head do that!

Ricky:  I already have a guy who can do that.  You've met Luis, right? 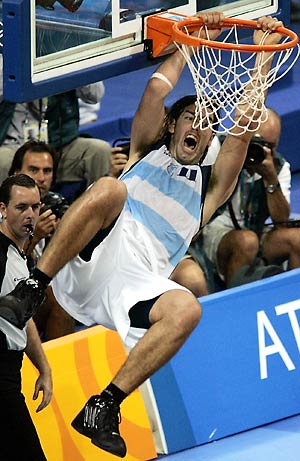 Joey:  Damn... I didn't know white boy could jump like that!  Okay, Coach, I'll have to give this some more thought.  Maybe I'll grow out my hair... in fact - the ladies might like that, too!  Thanks for the suggestion!

Joey:  Sure thing, Mr. Hackman.  I told that hippie guy's kid I'd let him show me around Los Angeles.  He's not playing much either these days.  Maybe he has some ideas for me, too?