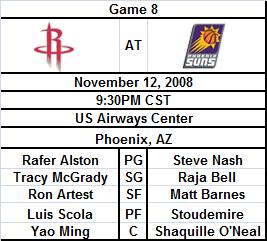 Alston vs. Nash – This match up shouldn’t even be given that moniker.  We’re talking about a multiple MVP award winning PG vs., well, a never award winning PG.  Alston has not been the reason the Rockets have 3 losses, but he’s also not the reason they have 4 wins.  He’s just out there.
Edge – Suns – I have nothing more to say

McGrady vs. Bell – McGrady has been either very on, or very off this year.  Unfortunately he was very off in our last two games.  He’s still better than Raja Bell, and is no way that a knock on Bell.  He’s actually one of the most underrated players in the league in my opinion.  I really like his game, he’s a player that you hate on one team but would love on yours.  Kind of like Matt Harpring, but he’s a lot better than that.
Edge – Rockets - Tracy played some good games last year against Phoenix, look for more of the same tonight.

Artest vs. Barnes – Artest has shown us the best and the worst of his offensive game.  I’m not sure he’s shown us the best of his defense, but he’s been nothing short of solid on that end in any game.  His energy is always there, but you can see that he’s not sure exactly how he should fit into our offense schemes.  Frankly, I don’t blame him, we’re completely disjointed there.  Barnes is a good player, good energy and fun to watch on the court.  I still can’t believe he’s on the Suns now.
Edge – Rockets – Pretty simple pick here

Scola vs. Stoudemire – Scola has arguably been our best player so far this year.  Other than the Clippers game where he was taken out of the mix with fouls (including his daily 2 fouls that are absolutely ridiculous), he has been taken out of the game when he has been dominating.  His usage on the court makes absolutely no sense to me.  When he’s out there the offense seems to flow.  I know that Landry has been solid too, but you will never explain to me why you sit a guy shooting 7/10 (this has happened twice) for extended periods of time.
Edge – Suns – Stoudemire is scary good on the offensive end, one of the most gifted players in the league.  Luckily he doesn‘t really play D so Scola will have open looks.

Yao vs. Shaq - Yao has not always risen to the challenge all the way with Shaq.  I don’t’ like being a whiner, but referees poorly officiate Shaq.  The do about 10 times worse officiating Yao.  It’s never more evident than in games where the two matchup.  In those games Shaq shot 110 free throws to Yao’s 45.  That’s laughable on every possible level.
Edge – Rockets – Yao has actually played pretty well the last few games, with poor rotations getting him out of rhythm and poor offensive usage getting him out of his real position.

My prediction – An embarrassed Tracy McGrady absolutely goes off tonight.  Rockets win it with his scoring and everyone else’s defense.