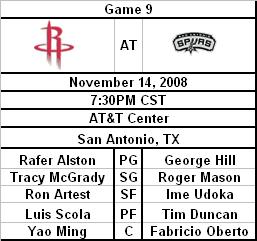 Honestly, I don't even want to do this.  It's not fair to San Antonio.  Their best two players are out in Ginobli and Parker as Duncan is not all of who he used to be.  He's still a fantastic player, but he's more like a top 20 PF of all time right now than the great PF of all time that he is.  Jacque Vaughn is getting meaningful minutes on this team right now,  That should tell you what you need to know.

Alston vs. Hill - George Hill might one day be a good player, right now he is a rookie in over his head with Tony Parker injured.  I'm disappointed that the NBA hasn't released suspension info yet.  Tonight would be the best night for Rafer to sit out his inevitable game.  He'll have to settle for not getting mind-fudged like he did on Wednesday.
Edge - Rockets -Rafer Alston is better than George Hill

McGrady vs. Mason - Tracy McGrady is at his best right now when he still takes the ball to the hole.  He's found a way this year to do it without hitting the ground as much.  Toss out two awful games and he's actually been really good this season.  I have nothing constructive to say about Roger Mason.  He's a decent player, but not a starter in the NBA.  It's always odd who makes it and who doesn't.  You can't convince me that there aren't a number of players just like him playing in Italy and Greece and Israel, etc.
Edge - Rockets - McGrady will not let a chance to take down the Spurs go

Artest vs. Udoka - Seriously, this should be a blood bath.  Ron hasn't played very well as of late.  I expect him to step it up soon.  Is tonight his night to carry the team?
Edge - Rockets - Come on, like I was going to say Udoka?

Scola vs. Duncan -Duncan so far this year has been carrying the team.  I think that's more a lack of other options than it really is Duncan really dominating.  He's been really good, but from what I seem he still seems off his peak.  His offensive numbers are the best of his career, but his defensive stats are taking another step down.
Edge - Spurs - I might have to cheat here and start putting it as Scola/Landry

Yao vs. Oberto - Yao has been very effective in his last 3 games.  I'm looking for 18/12/2blocks tonight in about 28 minutes.
Edge - Rockets -  Oberto is not a threat to Yao, neither is anyone else on their bench

My prediction:  The Rockets come out strong and blow this game out of the water.  That way everyone can get some rest before tomorrow night's game with the Hornets.