That's what you get for cutting Robert Horry!

Share All sharing options for: That's what you get for cutting Robert Horry!

So...... the San Antonio Spurs decide over the summer that Robert Horry isn't good enough for them. He brings them 2 rings, clutch shots, and a team-first attitude... and they send him to the curb in June.

Every team that has ever said goodbye to Robert Horry has suffered to this very day. Seriously. Rockets trade him and E.T. for Chuck in 1996 - 0 rings since then. Phoenix trades him (and his towel) to the Lakers for Cedric Ceballos (brilliant!) - 0 rings since then and a ton of disappointment. Horry got even. Later, the Lakers let Horry go. In favor of Karl freakin' Malone?!? Yup... 0 rings since that day. And you thought it was because the Lakers traded the Fat Ass? Nah.

Karma is a bitch.

San Antonio is learning that now.

Manu...... out with an ankle injury from the Olympics.

Frenchy the 1st....... out with an ankle injury after getting a double-nickel.

The Spurs? 2-5 and sinking in a tough division. Or, put another way, playing worse than the freakin' Memphis Grizzlies!!

Only one thing I can say to that: 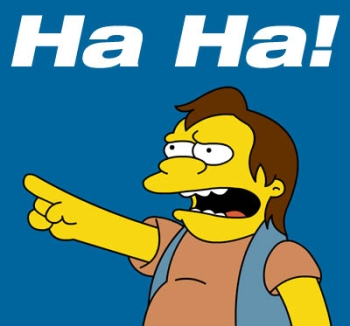 Oh.... Rockets take on the Spurs tonight in San Antonio at 7:30pm CST.