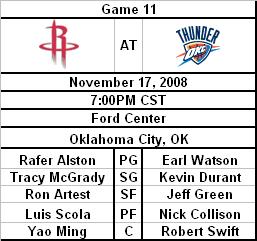 This game should end with a 20 point blowout. However, since the Rockets haven't blown anyone out this year, and have actually lost a game against a Ginobli/Parker-less Spurs team, anything is possible.

And I don't care what ESPN says, we have only played the Thunder once, very much like the Texans have never played the Oilers (I hate you so much Bud Adams, now go EABOD AND DIAF).  We are 1-0 against them, and that's all that ever happened. The Sonics are sadly dead, long live the Reign Man and The Glove, as much as I hated that team, they were damn good.

Alston vs. Watson:  Neither of these guys will kill you.  Both of them could come up big for you out of the blue.
Edge:  Rockets:  Rafer sucks less than Earl sucks

McGrady vs. Durant: KD has won me a lot of bets.  I still can't believe someone thought he wouldn't average more than 18 a game last year.  That was easy money.  He has a special place in my heart, even if I do wish he stayed one more years for an NC with Texas.  Tracy has been fantastic at times this year.  He was also one of the worst players I've ever seen in the 4th quarter against San Antonio.
Edge: Rockets:  While I think KD is fantastic, TMac always shows up for meetings against the young guns to show them up.

Artest vs. Green: Green has a lot of potential.  I really think the Thunder are going to be happier and happier with him as time goes on.  This year, he's just not as good as Artest.  He's a better scorer right now, but that's on a team that needs his points badly.  Crazy Pills has been good, but not quite what I hoped he would be so far this year.  I expected him to be great.  Still about another month from that happening in my opinion.
Edge: Rockets:  Artest has to break out of his shooting slump.  Is tonight the night?  I feel like I've typed that before.

Scola vs. Collison:  I hated Collison at Kansas, just hated him.  He was a dominant player there, and you just knew he was going to get drafted high and be an NBA bust.  I think what angers me most is how much richer he is than me.
Edge: Rockets: Scola is a lot better player at every facet of the game.

Yao vs. Swift:  Yao finally had a very good game again.  He's miles better than his competition tonight and it will show.  Robert Swift has Joe Klein potential, and I don't knock that.  Klein had a long, profitable career, I expect the same for Swift.
Edge:  Rockets:  Come on now, it's Robert Swift, THIS guy: 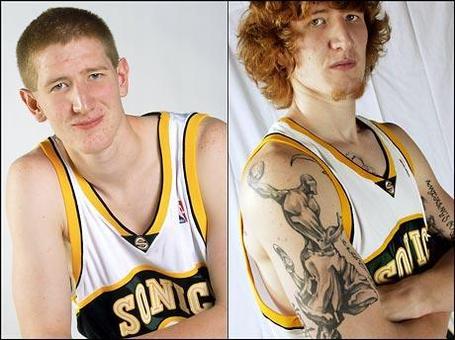 Though, I am a big tattoo guy, and he has some sweet ones