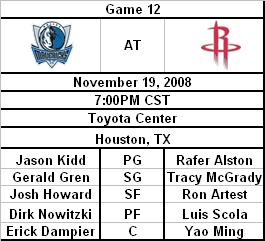 I'm assuming that all three guys are playing tonight.  If not, I still think the Rockets are better, even with Von Wafer in the lineup.  The X factor, as always in Mavs/Rockets games is Jason Terry.  When he gets it going the Rockets usually have problems.  The Mavericks defense has been horrendous this year, letting up almost 100 points a game while only scoring 98.  As of today, the Rockets defense is letting up the least points in the league at almost 89.

Alston vs. Kidd: Kidd is old and beaten down, but still averaging 10 and 8 a game.  Rafer is a mediocre player, but is at 9 and 4.  His defense hasn't been as good this year, but it's still been solid.
Edge: Even - I think Rafer is one of the few guys that is strong enough to D up Kidd, that's the only reason I'm calling it even.

McGrady vs. Green/Wright:  Tracy, you are slowly killing me, seriously man, stop getting hurt.  I don't think I can go through this for another 2 seasons.  And nobody is going to trade for you with all these ailments.  Not that we should trade him, not saying that at all, but if it doesn't work out this year (at LEAST round 2 of the playoffs), that will be what we try to do to get his number off the books.  Gerald Green wasn't good enough to make this team.  Antoine Wright is extremely athletic, but got a better education in HS than at A&M according to him.  Sorry, just had to throw that out there for a few of my Aggie friends.
Edge: Rockets - Even a hobbled McGrady will be forced to destroy these two

Artest vs. Howard: This should be the best match-up of the night.  I know I keep saying that with Artest, but it is true.  While he hasn't been the scoring boost we thought he would be to date, he has done all of the little things right.  Those little things are the real reason that Daryl Morey brought him to Houston.  Howard has been outstanding so far this year.  He won't sing the national anthem, but he does score 20 and board 8 a game.  His free throw percentage is the only thing off about his offense right now.  His defense is suspect, but he always brings a little extra against the Rockets.
Edge: Even - Howard's offense vs. Artest's defense

Scola vs. Nowitzki: Dirk is shooting the worst percentage of his career this year but has chosen to just shoot more to keep his scoring up.  He's still the best scoring power forward in the league.  He can't guard Scola though, and I'm hoping that Adelman is starting to see that Scola could easily average 18 on this team and 20 on a team without so many scorers.  His minutes have been up the last two games and it has paid big dividends on the court.
Edge: Mavericks - Dirk is one of my favorite players in the league.  Yes, he's a flopper, but he at least does it with style like Battier.

My prediction:  Rockets win, even with our three hobbled stars overall Houston just has too much for the Mavericks if they play their game.  Of course, I said something