Share All sharing options for: Q&A with Third Quarter Collapse

In anticipation of the Yao/D-Ho matchup, we exchanged some questions and answers with Ben Q. Rock over at Third Quarter Collapse (a fellow SBNation site!).

Here's our questions and his answers... our answers to his questions should be posted to his site sometime today:

1.   How would you compare Dwight Howard to Shaquille O'Neal at their comparable ages and experience?  While Shaq got to the NBA Finals in 1995, he had Penny and Nick and Dennis to help... what does D-Ho need to take Orlando to the Finals?

Shaq came into the league bigger, stronger, and with a better set of offensive moves that Dwight did. Consequently, he dominated the league immediately. Howard's taken more time. Now, he's arguably just as strong as Shaq was at 22, and indisputably leaner. I don't know that Dwight will ever match Shaq offensively, even if he got more touches (Shaq's usage rate after 5 seasons was 29.9; Dwight's is 21.9). I do believe, however, that he'll be a better defender, and he's already a better rebounder. He's simply more disciplined.

Dwight needs a bench. Maybe it's silly of me to compare teams across decades, but in this analogy, Mickael Pietrus is Nick Anderson; Hedo Turkoglu and Jameer Nelson combined are Penny Hardaway; and Rashard Lewis is Dennis Scott, if Scott were tall, skinny, and a power forward. They need a bench and, to further extend the analogy, a Horace Grant-type power forward. Someone who rebounds, defends, and hits the occasional 15-footer. You know, like Luis Scola.  (ed. note - gratuitous praise for Scola??  Such a suck-up!  I love it!)
2.  Rashard Lewis is a local Houston guy, so we've always somewhat followed his successes here.  Still mad we passed on him for Bryce Drew, Michael Dickerson and some Euro dude.  Would you consider Rashard to be worth the mega-bucks deal he signed?  And what can we expect from him this year?
Rashard Lewis will never live up to his contract. He's not a max-level player, and never was. At the same time, it's not his fault that Otis Smith wanted to break the bank; was he supposed to turn it down? Not everyone is Gilbert Arenas or Tim Duncan, two guys who have settled for less than the maximum salary.

That said, we should not confuse "not being worth $118 million" with "not being a good basketball player." Lew's main responsibility is to keep the floor open for Dwight with his three-point shooting (although he's been well off the mark this season). Additionally, he's an unselfish player. He went from being the top option in Seattle to being the third option in Orlando, playing out-of-position to boot. And yet he hasnt complained, at least not that we know of.

This year, Rashard has vowed to be more assertive offensively and not settle too often for three-pointers. He seems more willing to drive the ball, but not by much. We'll see what happens. There's a chance that he could shift to small forward if Hedo Turkoglu gets traded, which is a distinct possibility, given his pending free-agency and the threat of the Magic getting nothing in return for him.
3.  Aside from Boston, who is the one team in the East that poses the biggest threat to a lengthy Magic playoff run this year?
There are several teams in the East that could give the Magic fits. Cleveland leads the league in offensive efficiency even though Mo Williams isn't playing well yet; and Detroit has beaten the Lakers and the Celtics since acquiring Allen Iverson, not to mention the Magic in the last two postseasons. History compells me to fear the Pistons more than the Cavs at this point. We'll know more once the Magic play those teams; they have not done so yet this season.

It's encouraging that they're 2-0 against Philadelphia and Toronto, two teams that made major offseason moves and were (are still?) regarded in some circles as being a cut above Orlando.

4.  If you could have one player in the league to put you over the top, a guy that costs 9MM a year or less, who would it be?  If you had to cut out one starter, who would it be and why?
That's such a loaded question. There's no way I can answer it without feeling really awful, frankly. But if I had to get rid of one starter, it'd have to be Hedo Turkoglu. I love him and he's my favorite player, but the Magic can't afford to lose anyone else. Cutting Jameer Nelson means Anthony Johnson is the starter; cutting Mickael Pietrus means Keith Bogans is the starter, in which case the Magic are right where they were at the beginning of last season; cutting Rashard Lewis leaves a gaping hole at power forward for some combination of Tony Battie, Marcin Gortat, and Brian Cook to fill; and cutting Dwight Howard is just... yeah.

Lewis makes Turk expendable, in some way. If Turk were off the team, Lewis would shift to small forward, and the $9 million player the Magic acquire would play power forward. Ideally, he'd be a veteran, so the Magic could go into definite "win-now" mode. To that end, I suggest Rasheed Wallace. That's cheating, a little bit, since he'll make nearly $14 million this year. However, he's in the last year of his deal, and $9 million is a more than generous sum for a player of Wallace's caliber. He rebounds, defends, shoots threes, and can serve as a tutor for Dwight, whom he once famously referred to as his secretary. Quite honestly, I can think of no other realistically attainable player who fits the Magic's needs as well as 'Sheed does.

Yeah, I am sooooo ready to see Yao and D-Ho battle it out on Saturday.  Yao better play, dammit!! 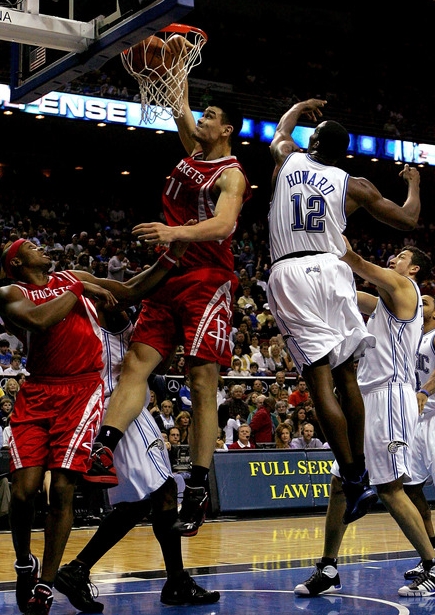 Ahhhh, the long-lost days of when Yao could jump!