It's Friday, and less than a week until Turkey Day, which means no one is paying attention to work... though I can only hope that doesn't include our Rockets, who seriously need to take care of business tonight in our nation's capital. 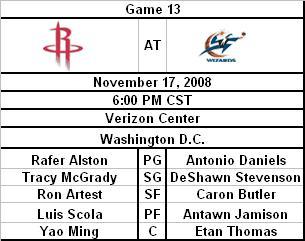 Alston vs. Daniels -- two guys who have nearly identical styles at PG.  If Rafer can avoid getting mind-f**ked and/or getting ejected, he theoretically should win this matchup.  If McGrady is still hobbled, Alston may have to take a bigger role in the offense... and that could be really good or really bad.  Advantage:  Alston.  barely.

Humpty Dumpty vs. Stevenson -- Stevenson loses points for being the moron who tried to taunt LeBron all last season and the playoffs.  McGrady loses points every time he gets jump shot happy.  Then again, T-Mac on one leg and with one arm is still a better player than 80% of the league, and DeShawn is not in the upper 20%.  Advantage:  Tracy McGrady.

Crazy Pills vs. Caron Butler -- I hate to do it to Crazy Pills, but after seeing him look like Luther Head in a layup line against the Mavericks (i.e., not only missing layups, but missing them badly and sometimes not even hitting the rim), I gotta think Caron might have the upper hand here.  Butler is an all-star who the Lakers somehow thought was a lesser player than Kwame (then again, that eventually led them to Gasol).  Unless Artest is fully committed to locking down Tuff Juice, it is Advantage: Butler.

Luis Landry vs. Antawn Jamison -- Jamison is one hell of a good player.  And the winner of all those "who will be the better UNC product - Antawn or Vince Carter" debates.  Yes, Antawn won.  But my extreme bias will never allow me to think that any player from an Eastern Conference team is better than Luis Scola, much less the "Luis Landry" combination.  So, uh, Advantage:  push.

Great Wall vs. Etan Thomas -- Thomas might be one of the most intelligent and interesting people in the NBA.  Fortunately, there are no bonus points awarded for poetic ability when keeping score.  Big, big Advantage:  Yao Ming.  (Welcome back, big fella!  Scola missed you...) 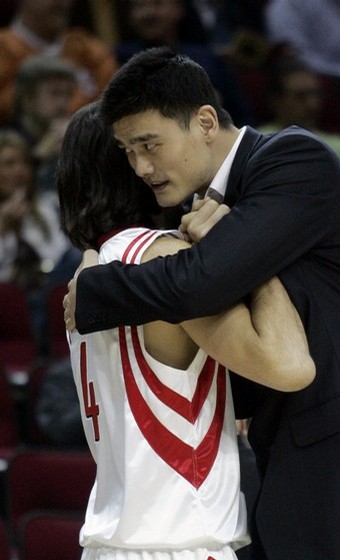 Prediction?  Rockets shake the Maverick-induced hangover and coast to their first true "blowout" victory of the year.  No Agent Zero means no "W" for the Wiz.