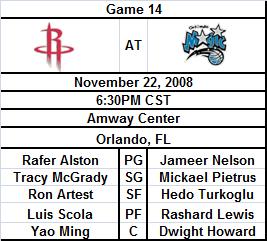 Alston vs. Nelson: I've always liked Jameer Nelson, he is a starting quality PG and plays hard.  He finishes relatively well and is a pretty decent shooter overall.  Yes, I would trade Rafer for him straight up right now.  Rafer has never shot this poorly in extended time in his career, and let's not pretend he is lighting up the assists number to counteract that.  He's obviously getting frustrated with his own play on the court and it's caused two silly blow ups, one at his own teammate.
Edge: Magic:  Nelson is finally realizing his potential in the NBA

McGrady vs. Pietrus: Pietrus could give McGrady fits, but unless he plays off of him and makes him a jump shooter, any solid D is going to get abused by McGrady.  I'm still dumbfounded that some teams play up on him, but I think Pietrus will do that tonight.
Edge: Rockets: McGrady is clearly the better player

Artest vs. Turkoglu: Ron has slowly been fitting into the offense better and better.  His spat with Rafer at the beginning of the game yesterday aside.  He's been getting to the hole with ease, and now just needs to finish the layup.  Turkoglu is shooting worse than I've ever seen him.  He'll probably turn it around, but tonight is not going to be the night to do that.
Edge: Rockets: I like Hedo Turkoglu, but Artest is going to shut him down

Individually their per 36 numbers are pretty close, with Landry and Scola being better in most categories.  And each up them costs around 11 MM a season less, and 7MM combined less. Edge: Rockets: Also know as the no where close to max deal duo.

Yao vs. DHo: Dwight Howard has impressed me this year, and I was already a big fan.  He does dissapear for some odd reason.  Statistically he is a freak, and the better player right now.  He's also not coming back from injury or playing on that injury a lot faster than he should have.  His rebounding skills are outstanding, and today they are better than Yao's have ever been.  He's not in Yao's world as a pure offensive player, but he does always find a way to get in close and put back the offensive rebound, something Yao is not doing as well this year.  Here's the thing though, Yao has destroyed Howard in all but one career meeting.  And in that one close game, Yao was still the obvious better player.  Here are the stats, I'm not making this up:

Edge: Rockets:  Until DHo can prove it on the court against Yao, Yao will always get the edge here

My Prediction:  I'm done predicting the Rockets until about 10 more games pass.