A quote from Matt Bullard on the air tonight:

"I believe Dwight Howard is the best center in the NBA" 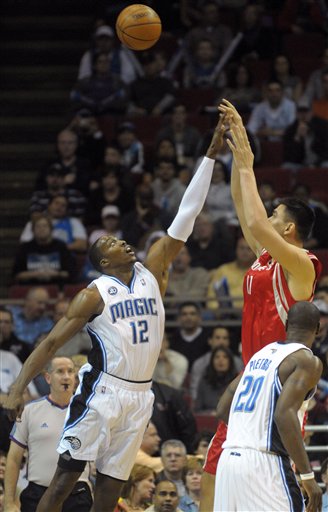 Yao must have been nearby and heard this blasphemous statement.  For Yao only went out and decided to destroy Dwight Howard and the Orlando Magic.  Yao finishes with 22 points and 13 rebounds.  And it could have been worse if his teammates didn't forget about him and the referees decided not to pick on Yao in the 3rd quarter.  (btw, Tony Brothers and Scott Wall?  You two jackasses are terrible referees.)  Rockets win their 7th straight game against the Magic in Orlando.

Howard had a decent second half, but he was outplayed by Yao the whole time.  And the double-double king couldn't even get a double-double.  (I hate the "double-double" stat but if it's what he's known for, I must point it out when he fails to achieve it.).  Howard finished with a quiet 13 points and 9 rebounds.  And could only manage to take 10 shots while Yao and Chuck Hayes smothered him on defense.

Oh, and if there is any doubt... Crazy Pills is truly a Tru Warier.  He was awesome tonight.  And clearly playing in pain (see, that's how you do it, T-Mac!!).  Carl Landry also played some amazing defense against Rashard Lewis.  The role players really stepped up tonight.  Even Rafer chipped in with 17 points and 7 assists!  Biggest surprise of the entire game?  We had a Brent Barry sighting!  Brent Barry finally made 3 pointer!  Woo hoo!

Next game is Monday - rest up guys!