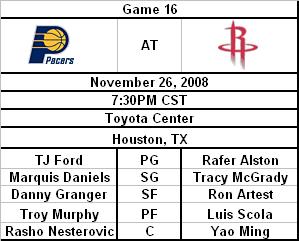 The Rockets take on the Indiana Pacers on Wednesday night at 7:30 PM CST in Houston at the Toyota Center.  I'll be there with my Mom (yes, my Mom wanted  Rockets tickets for Christmas, I have a great mother).

Alston vs. TJ Ford: I'm so tired of Rafer Alston right now.  He mistakes idiocy and "keeping it real" for fire and passion.  TJ Ford is one of my favorite players in the history of basketball.  He singlehandedly made Texas a top 10 destination for NCAA basketball talent.  His game has improved the last two years so that he easily a top half PG in the league.
Edge: Pacers: TJ has slowed a bit since his hot start.  I haven't seen his games but the TO numbers have gone up.  I'm betting about 60% of those were due to his teammates not paying attention for the ball hitting them in the hands.  There are very few players in the NBA not named CP3 or Nash that can put a ball anywhere they want like Ford can.  Sadly, as I witnessed in Toronto, his teammates weren't always looking for the ball.  You have to keep your head on a swivel with a guy like Ford at the point.  Either way, even with that A to TO ratio, he's better than Alston.

Wafer/Battier vs. Daniels:  With Tracy McGrady out and Shane Battier potentially in, I think you'll see Von Wafer start with Artest and Yao.  You'll see a lot of switching and you might even see Artest at the 2 a bit and Landry at the 3.  Contrary to popular belief Landry is good enough defensively at the three and cuts well enough to play offensively from that position.  This Pacers team has three guys I really like in Ford, Granger and Daniels.  I'm still not sure why Dallas got rid of him as I thought he was up and coming there.  He's having a good year, and I expect him to continue that pattern.
Edge: Pacers:  While Daniels isn't an All Star, the influx situation without TMac gives him the edge here.

Artest vs. Granger: I know, I know, every game it seems like I say that this is the match-up I look most forward too.  I cannot help it, it is always true.  When you have a physical freak like Ron Artest on your team, it makes any match-up he has exciting.  Danny Granger has been fantastic this year.  He's a guy I've loved since the 05(?) NCAA tourney.  He's everything you could want in a SF/SG.  He plays hard every second I've ever seen him on the court.
Edge: Even:  It's about as close as a match-up can be

Scola vs. Murphy: I hate Notre Dame, sorry to the Domers out there, but I'm a hater.  And last night's loss in Maui did not make me like them anymore.  Scola will use and abuse Murphy tonight.
Edge: Rockets:  I'm begging you Luis Landry, destroy the Domer!!!

Yao vs. Nesterovic:  Yao is playing like he was in January/February of last year.  That's a big Uh-Oh for Rasho Nesterovic.
Edge: Rockets:  All day, every day

My prediction:  My Mom and I have a great time with a fun Rockets win.  And yes I'm a mama's boy, but my Mom is awesome so it was inevitable.  Don't be jealous

Check out Indy Cornrows for another perspective