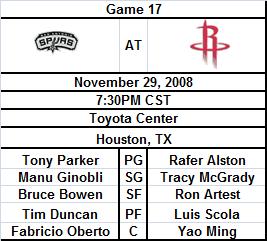 I am so sick of seeing players come back to play against the Rockets. I truly enjoyed our break from this last year during the 22 game winning streak where it seemed like we got lucky a decent amount.  It's back to our historical unluckiness with players coming back to play against us tonight though as Parker is back just in time to play the Rockets.

Alston vs. Parker: Those of you that know me well know that I am not a big fan of the Frenchy (Now if a French company wants to buy my company then I'll be all for that, but that's not the point).  He has been under- and over-rated at times in his career.  If he plays like he did early in the season though, he's never been rated high enough.  Rafer has regressed terribly this year.  He does get some quiet assists and doesn't turn the ball over as much, but in general, this is his worst season as a Rocket.  Let that sink in, Rafer Alston is worse than he's ever been in Houston.  That makes me want to cry
Edge: HUGE for the Spurs:  Parker is not a big guard, at 6'2 Aaron Brooks can play with him.  Here's hoping we get a lot more of Brooks tonight than we have seen lately.  In a lot of our wins Brooks has seen his playing time go down from 28 to 17 to 15 to 10.  There is no excuse for that but bad coaching.  Adelman, you are a really good coach, let's get it together big guy.

Ginobli vs. McGrady: I know Ginobli comes off the bench, but that's only because Poppovich is the smartest coach in the league.  Soon Artest will be coming off the bench in a similar manner.  Well, if everyone eventually is healthy together that will happen anyway.  Ginobli has become one of the best players in the league.  I'd put him in the top 20 easily right now.  I haven't seen if McGrady is playing yet, but it doesn't matter, Ginobli is better than anyone we have at the two.
Edge: Spurs: I hate that I like Ginobli as much as I do, he's just really, really good

Artest vs. Bowen:  I don't think I dislike a single player in the NBA more than I dislike Bruce Bowen.  He's a good defensive player, but he's also the dirtiest player since Karl Malone retired.  And no rational person would disagree.  He is dirty, period.  Ron has to learn shot selection, even when he feels the team needs him to score.  Take the ball to the hoop, very few guys can muscle you out of position.  And those that can will have to foul you to do it.
Edge: Rockets: I hate Bruce Bowen, I really do.

Scola vs. Duncan: Scola was a man amongst boys in that Indiana game, and if he was ever consistently given 30-32 minutes a night, that is exactly what I would expect from him.  In fact, he would probably shoot better.  For Duncan, see the Q&A with Pounding the Rock.
Edge: Spurs: Duncan is the best power forward in the history of the game.  I love saying this as it gets a jab in at Karl Malone.  There aren't many things better than getting to knock The Mailman down a peg.

Yao vs. Oberto: Yao had 9 shots in the first game.  That is just pathetic.  I see no reason for him to ever shoot less than 15 times.  The Rockets have to be the worst entry pass team in the league when McGrady is out.  And even McGrady goes into no pass mode about 65% of the time.  You will never convince me that Yao cannot catch a pass that goes over the top of the defense.  You will even get a lot of fouls called when he jumps to catch that pass because people will get underneath him because the double teamer has no real choice there.  Fronting Yao should be the worst decision a team could make, unfortunately the Rockets either are incapable of putting that pass in place, or just refuse to.  Either way, I'm dissapointed in Adelman.
Edge: Rockets: Again, if the Rockets feed Yao they should win 60% of their games

My Prediction:  I'm going back to not predicting games.  It's too early in the season and I'm too biased.  I'm going to wait until game 25 to start predicting again.