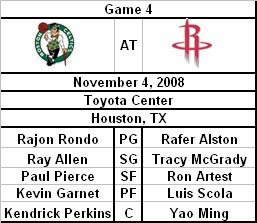 Okay, okay, that's not actually true, but it would be sweet, right?  I'm not suyre what to make of the Celtics loss to the Pacers and I'm not alone, neither is Celtics Blog.  There is really no reason for that loss, the Pacers, even with a Longhorn on the team, are not even close to as good as the Celtics.  Losses happen though, even inexplicable blowout ones.  As of yet, they haven't happened to the Rockets, but Tuesday night is a huge game.  The Celtics ended the 22 game win streak unceremoniouslyand I for one want a little payback.  Both teams will be on ample rest, and with the exception of Battier, there are no other players out for the game of importance.

Rondo vs. Alston - They are both adequate and give their teams what they need.  In Rafer's case, I think he is one of the top 5 fits in the league for this team.  His shooting is awful, but his decision making has been right on the money so far.

Edge:  Tossup - Rajon Rondo isn't any better than Rafer is bad, so I'm calling it a tossup.  Sorry, in no way am I on the Rondo bandwagon.

Allen vs. McGrady - They are both old, they are both broken down.  Allen is the pure shooter that TMac always thinks he is.  McGrady is the slasher that Allen never has been able to be

Edge: Rockets - If McGrady will keep going to the basket he will be fine.  His speed is still there, his explosiveness is still top quarter of the league.

Pierce vs. Artest - They are both players that have been vastly underrated their entire careers.  Now, with a championship under his belt,  Pierce is being crazily overrated.

Edge: Celtics - Pierce is good, I really like him, he's a hell of a player but I think people have gone overboard.  Frankly, he's a pure scorer that Artest will love to try and shut down.  I'm looking forward to this matchup a lot.

Garnett vs. Scola - I am very much looking forward to Luis Scola frustrating the crap out of Garnett.  If he can get away with the good defense he plays without getting a ticky tack call or two, look out.  However, Garnett is borderline the greatest PF of all time.

My rankings of the players I've seen in my lifetime

Edge: Celtics - Garnett is a top 5 PF of all time, Scola and Landry aren't, no shame there

Perkins vs. Yao - Yao dominates the center position and Perkins, while young and talented, can't guard him.  He'll get some hustle plays and some idiot somewhere will try and say he played Yao hard while ignorning the 27 points and 12 rebounds Yao had.

Edge: Rockets - Did you expect anything else?

My predictions:  Rockets move to 4-0 on the season, the Celtics leave and start to roll up a bunch of wins.