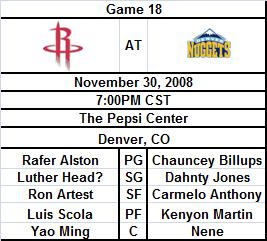 Alston vs. Billups:  Chauncey Billups will break down before the end of the year in my opinion, but when he's on he's a top 5 PG.  And the Nuggets were greatly missing someone that could run their machine.  Iverson wasn't that guy, Billups is.  If Rafer plays every game like he did last night, I will never complain about him again.  Sadly, he won't.
Advantage: Nuggets

Head vs. Jones: I have no comment
Advantage:  I have no idea

Artest vs. Anthony: Carmelo Anthony is too physically gifted to not be dominating the league right now.  He's almost there, but has regressed a bit on the offensive end statistically.  I'm interested in seeing him play tonight to see if it's just him being more of a team player or if he just really has dropped off a small bit.  He was terrible in the Lakers game I saw last week.  But I'm going to give him the benefit of the doubt and just say it's early in the season.  In all the talk about Ron Ron's terrible shot selection it sometimes gets lost that he does every single litttle thing you could want.  And he does it every night.  His intensity is there.  His team defense needs some work, but I can see that starting to come around too.  By about game 30 he'll have it down.
Advantage: Nuggets

Scola vs. Martin: What a monumental waste of money Martin has been.  He's been injury riddled his whole time as a Nugget and when he has been on the court I haven't been as impressed as I was early in his career.  Scola is consistently showing why Daryl Morey wanted him so badly.  He will take this match-up easily tonight.
Advantage: Rockets

Yao vs. Nene: Rick Adelman, teach your team how to throw over the top of a fronting defense.  You are worthless as a coach if you can't do this.  And since I know you aren't worthless, make it happen.
Advantage: Rockets

My Prediction:  Again, how the heck can anyone predict this team right now?