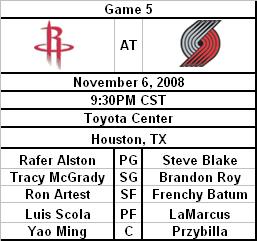 Alston vs. Blake – Considering Dave and I both want Steve Blake on the Rockets as our starter you’d think I’d be all over this match-up.  If you wanted to win a street ball game, Rafer all the way, if you want a guy that runs an offense and doesn’t kill you shooting, then Steve Blake is the perfect fit for your team.  The guy is shooting 46% from the field and 53% from the three point line.  He doesn’t get the high assist numbers because of the offense they run and Brandon Roy having the ball in his hands a lot.

Edge – Trailblazers – Blake to this point is really outplaying Mr. Alston.  That’s not to say that Rafer hasn’t been a solid ball handler and hasn’t taken a ton of bad shots.  It’s just that I would prefer Blake running the point for the Rockets.  I’m happy with Rafer right now though, and there aren’t a lot of players I’d take (non-superstar) over him right now for this team.  However, he has to figure out how to hit some shots though.

McGrady vs. – Right now Tracy McGrady is doing everything he has to for this team to work.  He’s obviously laboring and still making things happen.  Though if he doesn’t stop shooting three pointers, I don’t think my heart is going to make it the rest of the season.  That said, Brandon Roy is better at this point in his career and is only 24.  He’s not better than at 24, but that’s not the point.

Edge – Tossup -  has been playing too well and their stats are dead even.

Artest vs. Batum – The guy I wanted for the Rockets more than any other player (but CP3) in the league vs. the guy I didn’t want, at all, for any reason.  I hope Batum turns into a fine player, but I simply do not like the hit rate for guys like him.  Too much risk and not enough reward.  In essence we got Artest by trading Batum, that’s a HUGE win for the Rockets

Scola vs. Aldridge – Both players are very, very good.  Both are favorites in the league of mine.  I have ties to LaMarcus at and to Luis as a Rocket.  There are not a lot of  PFs other than the two of them, outside of David West, that I’d rather have on my team.  If not for Scola’s benching in the fourth quarter of the game, their numbers would be almost identical. Scola’s defense is vastly improved and I think Aldridge could average 20 a game this year.

Edge – Tossup – This was the toughest call to make.  I think  Aldridge is fantastic, but so is Scola.  The edge would go to the Rockets if you include all of Luis Landry, but one on one, I’m calling it a tossup.

vs. Przybilla – While the big guy out of has only shot the ball 9 times in 4 games while averaging 29 minutes, he has hit 7 of those.  He’s also a cool 3-11 from the free throw line, so I’m guessing  89% of those shots were dunks or lay ups.  I’ve also been impressed with his improved rebounding.  Enough has been said about ’s lack of explosiveness right now, so I’ll save it.  That said, is pissed offa bout his performance on Tuesday night.  Opposing teams don’t like to see after he gets pissed off about the game before.

Edge – Rockets - while the big stiff white guy (personally I always root for them) is much improved, even non-explosive is worlds better

I said before the season that I thought the Rockets would lose this game.  I think they are playing better than Portland right now, however and pull it out.