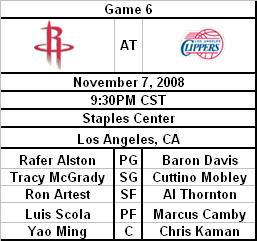 I’m not going to lie to you, this game snuck up on me.  I’m going to keep it short and sweet.  I will either be around right at game time or as late as 10PM.  Either way, let’s get off this losing streak.

Alston vs. – Baron Davis is much better than he has been this year.  He’s obviously ailing, but he’s been hurt his entire career.  His shooting is atrocious so far and I’m hoping for more of the same.  Rafer Alston, lost in how well Aaron Brooks played, actually had a decent, though somewhat ineffective game last night.  His shooting was actually in the respectable range and he didn’t make any bad decisions.

McGrady vs. Mobley – Tracy McGrady has started this season extremely well.  He has not shot more than 4 threes in a game yet and while I want him to shoot no more than 2 if he misses both, I’ll take that as a win.  I think given the back to back, you won’t see as much from him tonight.  Luckily, Cuttino Mobley has played 2.4 seconds of defense in his career.  Mobley is not the offensive player at 33 that he once was, he’s drastically dropped off from his 04-05 production and I don’t see him doing much more than his average tonight.

Edge: Rockets – Tracy McGrady is playing more efficiently that I’ve ever seen him play in his career, he gets a big edge.

Artest vs. – Artest has been off a bit the last few games.  His defense has even had a few lapses every now and then.  That said, he’s still one of the most complete players in the league and I look for him to shine on back to backs this year.   is going to be a beast in this league.  He’s not quite there yet, and I’m interested to see how he plays against a premier defender tonight.

Edge: Rockets – Artest is better until proves on the court otherwise.

Scola vs. Camby – Luis Scola better play in the 4th quarter tonight unless we are up by 20 points.  He’s been phenomenal in his minutes this year and they have unjustifiably been limited.  Marcus Camby is the most overrated defender in the entire league.  Yes he gets blocks, he also gets blown by all the time and does not position himself well a majority of the time.  Sorry, I don’t believe the hype.  He’s still a good player, but he’s not God’s gift to defense.

Edge: Rockets – When Scola is on the court, he’s awesome

vs. Caveman – has historically owned the Caveman.  I like the idea of getting out of his funk tonight.