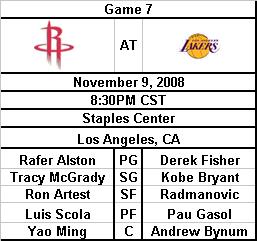 The Rockets come into an early season match up with the Los Angeles Lakers a bit off.  The offense isn't flowing right now, and I think it's going to take another 2-3 weeks before it fully does.  The defense is playing well until Ron Artest gambles.  And that's not to say I don't enjoy the gambling, just that the rest of the teams needs to learn to anticipate that and cover the hole up if he doesn't get there.  Those gambles are what makes Artest as good on D as he is, and they simply cannot be taken away.

Alston vs. Fisher -Fisher is the better shooter, but at 36% from the field, it's nothing to brag about.  Rafer has the edge at 4.7A to 1.5 TOs, but not many of those have been of the drive and dish variety that the team gets from Aaron Brooks.

Edge - Tossup - Both give their teams what they need.  Neither is outstanding, though Fisher has had the better career.  It is potentially possible that both will get surpassed by their backups as starters.  It's also possible that the coaches are set in their ways and like the veteran there.

McGrady vs. Bryant - Tracy has found a way to play through his ailments this year by driving at the appropriate times and not hoisting up unnecessary three pointers.  Kobe Bryant is the MVP however and deservedly so.
Edge - Lakers - Again, you don't get an edge over the MVP

Artest vs. Radmanovic - I haven't seen any Lakers games this year, but I've never been a big Radmanovic fan.  Artest has been hit or miss this year so far.  The Rockets need to find out exactly where he fits into the team offense.  Tonight, we know what his job is, put up about 15 points and D up Kobe.  With the need for fewer points from him, I'm hoping that he can have similar results to what Shane Battier did last year.
Edge - Rockets - I think I'll say this a lot this year, Artest is just better.  And in this case it's in every way.

Scola vs. Gasol - Pau Gasol has actually fallen his career points averages this year, but I think most of that can be attributed to all the blowouts the Lakers have been producing.  Scola has had two phenomenal games in a row, really showing his potential out there this season.  Unfortunately he gets called for 1 or 2 hustle fouls a game, also known as fouls that refs think are there but are not because his hair flops around.
Edge - Lakers - But as I've said in the past, this edge isn't as big as you would think on the surface.  The Rockets simply have another very good PF behind Scola in Landry and also have one of the best defenders in the league in Chuck Hayes as well.  Their stats on the season are really close, in their per 36 numbers Scola is actually playing better.

Yao vs. Bynum - Bynum is young, and good.  Contrary to the opinions of Lakers fans, even if he has a huge game tonight, he is too inconsistent to be considered even close to great.  Every NBA player with some skill has a great game every now and then.  Yao finally seemed to break out of his struggles against the Clippers.  The only reason he didn't have 20+ was they weren't running the offense through him as much, I think to take some pressure off of him.  His defense was really good, and his confidence seemed to be back.
Edge - Rockets- Yao is the better player, he always shows up in these center match-ups and I don't expect tonight to be any different.

My prediction: Lakers by around 5.  I think we have about a 43/57 chance of winning this game, but the Lakers already know how to play together and the Rockets are still working out the kinks.