Share All sharing options for: Rockets Vocab Word of the Day: "Rafer"

Hello Rockets world - my name's Tom and I'll be writing on The Dream Shake starting today.  Lee and Dave were kind enough to add me to the staff, so here I am.  I've got a weird thing for basketball vocabulary, so I'll be posting some words every so often.  Enjoy.

Today's word is "Rafer." You guessed it - it's named after Rafer Alston. 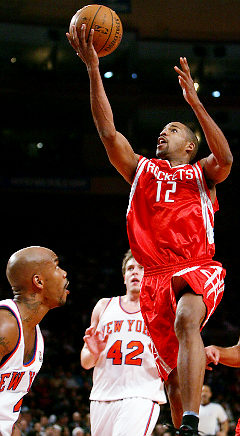 Definition: A lob or floater that is launched towards the basket when a pull-up jump shot, pass, or layup would have been more appropriate. A Rafer seldom goes in, but when it does, there's not much you can do except say, "Raferrrr."

As in "Luther Head just drove in the lane with plenty of space, but instead of going strong to the hoop, he just threw up a miserable floater, and yet it somehow went it. Raferrrrr."

If you aren't sure what exactly I'm trying to get across, take a look at this highlight video that some Toronto Raptors fan made while Alston played above the border. You'll see plenty of Rafers. In fact, this video manages to compile all of the Rafers that Skip To My Lou made. Every single one.