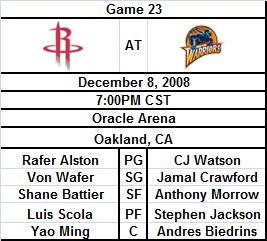 Let that starting line-up above sit in. That's what the Warriors put on the court the other night. A lineup with effectively (I can only assume) Stephen Jackson as the Power Forward. Or was it Morrow? Or was it Jamal Crawford?

I can't do a match-ups analysis for this game, my head might explode. No Artest, No McGrady, No Monta Ellis, No Maggette? Stephen Jackson is Day to Day as is Crawford. For that matter, so is Battier.

This game might as well start with the best 3 out of 5 coin tosses. I won't get to see it tonight, and let me remind everyone of the last time I couldn't see a Rockets game. It was last season (I believe January 29th), against Golden State. Yes, that's correct game 1 of 22 in a row. This Golden State team is every bit as uptempo as that one, but they don't play well together. Their best player chose to take the most money he could instead of taking just a little less and potentially getting a championship. Not that it matters because he's probably out for this game.

Let's go Rockets, don't dissapoint me when I look at the box score at 5:30 tomorrow morning. You don't want me working at the beach all day in a bad mood, do you?