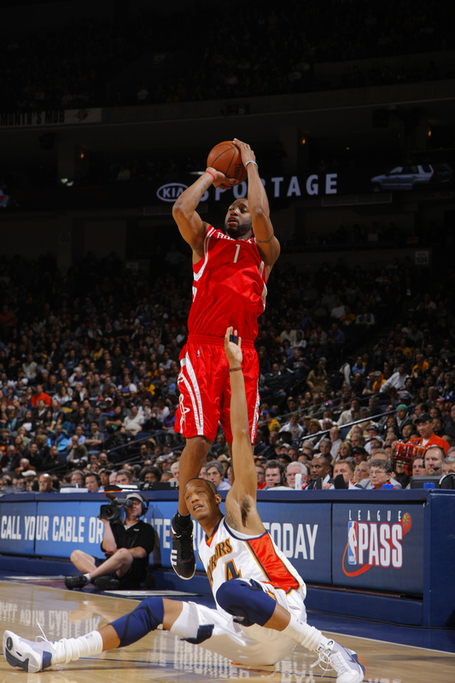 An example of stout Warrior defense: Put your hand in his waste.

Was there ever a question as to who would win this game ?  The Warriors had no Maggette, no Turiaf, no Wright.  We got McGrady back for a celebrity appearance and Yao played through a cold.  Everything played out the way it was supposed to, even after that little run at the end.  We made a good percentage of the thousands of open shots we had, Aaron Brooks, Carl Landry, and Von Wafer got quality minutes, and we had a Marcus Williams sighting.  Only thing missing was one of our favorite Rocket segments: a Chuck Hayes Free Throw Adventure.  Oh well.  On to the recap:

Tracy McGrady -- Fantastic night for McGrady.  I didn't expect this from him at all, and yet T-Mac goes out and plays sound, fundamental basketball, nearly notching a triple-double in the process.  True, it helps when all of your shots are suddenly unguarded, but he was able to get a good night's work in after some time off.  Now the question is: Do we play McGrady against LAC, or do we rest him and save him up for the Denver game on Wednesday?  I say bench him and give him extra time.  After all, it is the Clippers.

Rafer Alston -- Only Rafer could do poorly versus the Warriors.  He shot 3-11, had 13 charity points, and put up some more ugly shots.  But Aaron Brooks had a great game!

Marco Belinelli -- Usually I keep this to Rockets players, but it was just hilarious to see Marco constantly shoot a jumper, realize it would be short, and chase after it immediately after it left his hand.  That's some Warriors entertainment for you.

Luther Head -- Didn't score in nine minutes, had one of his token missed layups, and he fouled a jump shooter.

Almost-Injury of the Night: McGrady slipped while trying to beat Marco Belinelli off the dribble and tumbled to the floor.  I know my stomach dropped.

Clinically Insane Broadcaster of the Night: ESPN's Mark Jackson had this to say when ranking the NBA's best centers:

"Before the season started, I had Andris Biedrins ahead of Yao Ming at #2 behind Howard.  I mean, Biedrins had 17 straight double-doubles.  Yao can't do that."

Um, I'll let you choose the right words to describe this.

Utah Jazz Moment of the Night: Stephen Jackson took a charge against Yao in the first quarter, but it was obviously a flop, and one of the worst one's I've seen this year at that.  No doubt, as all of us Dream Shakers watched this take place, that ugly picture of Andrei Kirilenko suddenly entered into our minds like poison gas.

"Yeah, these are the Warriors" Moment of the Night: You may choose: A) Carl Landry's first flush in Rob Kurz's face.  B) Landry's running dunk that left Anthony Randolph and Kurz lying on the floor in agony as if they'd just taken bullets to the chest.  C) The moment Rob Kurz stepped onto the floor.

Next Game: Saturday at LA Clippers.