Word of the Day: "Biggins Abyss"

Share All sharing options for: Word of the Day: "Biggins Abyss"

Today's word is "Biggins Abyss."  I've linked "biggins", but if that's not clear enough, a biggins is an extremely large person, such as Bryant Reeves.

Definition: The area of the court between the free throw line and three point line in which a big man may receive the ball but under no circumstances is allowed to shoot or dribble. Observe the highlighted portion below: This is the Biggins Abyss. 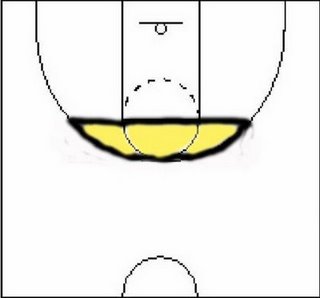 As in "Chuck Hayes received a pass in the Biggins Abyss; thus, he would have to stand and wait until someone else got open."

I've always been confused by the Biggins Abyss. Why do people such as Hayes, Ben Wallace, Greg Oden, Andris Biedrins, Shaq, and others always find themselves catching passes inside of its depths? Why can't they just stay down on the block? It's asking for a turnover or a five second call. And it's even worse if the shot clock is running out.

Normally there is one solution for someone who is caught in the Biggins Abyss.  They will turn and face the sideline, take one power dribble, and then stop, wait for a guard to run by them, and hand it off.  But even that is difficult sometimes.

You might be asking, "How is it that someone who is paid millions to play basketball can't make a ten foot jump shot?" I don't have an answer to that. The reasons surrounding the difficulty presented by the Biggins Abyss will always remain a mystery. Yet, some answers can be found as to why big men just can't shoot. I leave you with Adonal Foyle, my prime example.  He may not be in the Biggins Abyss, but if would have been uglier had he been: