Rockets have another back-to-back. Taking on the Clippers tonight.
The tale of the tape? 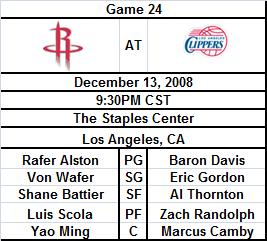 Sadly, there will be no Yao/Caveman matchup. Which is unfortunate, because we all know Chris Kaman can't f--king stop Yao. Yao has told him this much to his face. (And yes, I will link to this clip every time Yao play Kaman's team.)

Rafer v. Baron Davis. This one isn't even close. Rafer has played "better" in the last five or six games. He's still more of a liability to the Rockets than an asset, but guys like Baron Davis aren't exactly found on every roster. Huge advantage to Baron. Maybe we can give him food poisoning again?

McGrady v. Eric Gordon. This assumes McGrady can play tonight after trying to chase a triple double last night. If McGrady can't go (not wholly unexpected), then Von Wafer likely takes his spot. Either way, Eric Gordon is a rookie... and he's not Derrick Rose, so I can't possibly give this advantage to the Clippers.

Shane Battier v. Al Thornton. So very glad to see Shane back. Last time the Rockets played L.A., Thornton tore us up. He's quite the sneaky offensive player. Fortunately that's precisely Shane's job - slow down the offensively gifted. Shane is still not 100%, but he's not being asked to do too much. Slight advantage to Battier, strictly for the intangibles he brings that Thornton does not.

Luis Landry v. Zach Randolph. I still don't know why the Clippers traded for Zach Randolph. Oh, wait, yes I do - it's because Mike Dunleavy is desperate and not a genius like the Rockets' GM. Mr. Randolph is going to get his 20 points and 10 rebounds... and yet have no real impact on the game. Luis Landry should combine for 30 and 15 tonight, so the advantage stays with the Rockets here.

Yao v. Camby. Marcus Camby is a good defensive player who can block shots. That isn't going to help him against Yao. Yao on a broken foot still gets the advantage over Camby. And speaking of Dunleavy being a bad GM, maybe Daryl Morey can fleece him and trade for Camby at halftime? Yao needs a legit backup.

Prediction? The Rockets should win tonight, but this is exactly the kind of game the Rockets have had problems with this year... wrong end of a back to back against a young, athletic team. Here's hoping for a blowout, but I expect a close game. The difference will be how the Rockets handle Baron. And how the Clippers try to slow down Yao.