Maybe this picture will clue you in on how I feel after watching this game: 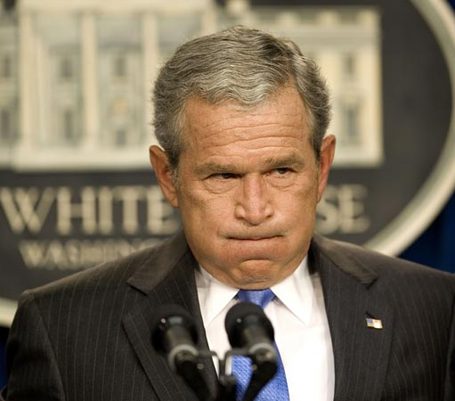 Media: "Mr. President?  Something troubling you?"

Media: "Could you clarify what exactly it is?  You look like you're about to explode."

Bush (quickly): "Nuh-uh...you look like you're about to explode."

Media: "Just tell us why you're so mad, Mr. President.  Is it your low approval rating?"

I echo the President's pure disgust in tonight's contest.  Quite frankly, it was hard to watch.  We had so many opportunities to make a run or get a defensive stop, and it just never happened.  I have to hand it to the Clippers - they played with intensity throughout the entire game, whether it was one of the numerous tip-ins they had, or if it was hustling to loose balls.  Marcus Camby wasn't allowing anything inside, and Zach Randolph couldn't miss, even on three pointers.  Dave was right - this proved to be a trap game for us, one that I think we overlooked.  Yet, if that's the case, I have to wonder why we'd overlook a pesky group like the Clippers, who actually played us well in Houston before bowing out in the fourth quarter during our first meeting.  Their starting lineup is packed with scoring potential, and it took a bunch of bad bounces and rim-outs by our guys to give them the confidence they needed to turn on the burners.  It's tough to decide if they won the game or if we lost it.  In the end, I think it was a little bit of both, and we definitely killed ourselves with the poor outside shooting.  Recap time:

One Up: Usually it's three, but after watching the game and looking over the stats, I could only find one bright spot in tonight's performance.  I was even desperate enough to put down "No Injuries" as an "up"...but then Rafer's hamstring acted up.  So here it is, your lone bright spot:

Yao Ming -- Yao, despite the turnovers, was effective tonight, scoring 24 points and grabbing 13 rebounds.  The four free throw attempts concerns me, but with Camby being present in the paint, it's not too surprising.

Shooting -- It's the most basic fact in basketball: if you don't shoot the ball well, chances are, you won't win the game.  We shot 35% tonight and went only 5-21 from three.  True, the Clippers had 12 blocked shots, but we missed some open three pointers that we would normally knock down.  I hate to pick on Battier and Brooks, but 1-9 from three point land isn't going to get it done.  To add to that, we actually shot better from three than the Clips, but ended up shooting much worse overall.  Those points in the paint made the difference, and we missed a bunch of close ones.

Interior Defense -- If there was anything I could be most disappointed with, it was our interior defense.  Eric Gordon must have had 10 layups tonight (not dunks, layups), and Zach Randolph absolutely dominated Chuck Hayes and Luis Scola.  LA only shot 20% from behind the three point line, which goes to show how much of this game was lost in the paint.

Refereeing -- It's too easy to attack the refs, so I'm not going to blame them for blowing certain calls.  I just thought the game got too physical at times and thought more fouls should have been called.  It seemed like the refs also forced other calls at times and missed many of the obvious fouls.  Just not a good night for them.

Almost-Injury of the Night: Yao went down after being poked in the eye, but quickly came back into the game.  However, it was a turning point in the game as we never re-claimed our lead.

Injury of the Night: Rafer Alston went out with a hamstring injury late in the game.  More results will come, but this gives Aaron Brooks yet another opportunity to prove he is worthy of a starting gig.

Coach Bullard's Tip of the Night: "Gotta dunk those bunnies."  - Bullard referring to our tendency to miss close layups, which are apparently called "bunnies."

Psychological Chaos of the Night: Rafer made a long three pointer to end the half, which brought up a dilemma.  I want the Rockets to score, but whenever Rafer scores, I'm pissed.  See, if Skip were to miss more shots, maybe he would take less shots, thus improving our chances of winning.

Next Game: Tuesday vs. Denver.  Come out and get your Luis Scola whigs!