Note to Rick: Score 100 Points and You Can Sleep All You Want

Share All sharing options for: Note to Rick: Score 100 Points and You Can Sleep All You Want

Normally stats like this have some sort of catch.  This one doesn't, because when it takes place, we're undefeated.  And not in some "when McGrady hits a three pointer on the third Tuesday of the month" kind of way.  Nope, this is much simpler.

If we score at least 100 points, we in.  The game might as well be pronounced over the very moment it happens.  And the stats do not lie:

We're 10-0 "When 100 Points Happens", and you can only count the Warriors for two of those.  The 100 Rule, as I have so cleverly dubbed it, isn't very lenient either: in the two games that we've scored 99 points, we've lost...by four points or less.  Basically, we're going to be slapped in the face if we think we can cheat the 100 Rule.  Case and point: The Brandon Roy Game.

You think this is a one-year statistic?  False.  Last year we went 29-3 when scoring 100 points or more.  So fine, you caught me, it's possible to lose, but two of those losses came against the Suns during the D'Antonian era, and the other was a one point loss at Denver, another scoring juggernaut that boasted AI at the time.

So Rick, please, just will your team to a 100 point game every night.  Then you can take a nap. 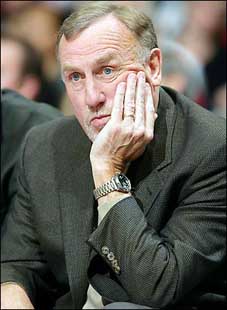