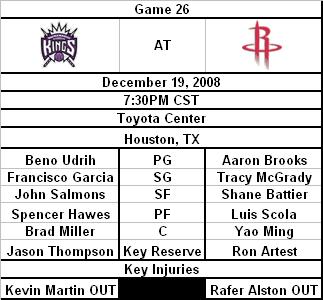 Point Guard
Brooks - In AB0s last 2 games as a starter, he has held Chris Paul to 2-10 shooting and Chauncey Billups to 3-10 shooting. So two guys he was supposed to greatly struggle against, he hasn't. He didn't outplay Paul on the offensive end, but he took Chanucey Billups up and down the court all game. I'm not exactly sure what Beno Udrih can do to him that those two guys could not
vs.
Udrih - I would trade Rafer for Beno, I wouldn't trade Brooks for him. Mostly it is an age thing on the Rafer side. But Udrih would be very solid on the Rockets. Every time I've seen him he's looked like a good shooter, but since he doesn't take a lot of threes he doesn't average a ton of points. I know he turns the ball over too much, but I think that has more to do with the team he's on than him being a poor passer.
Edge: Rockets: Like I said, I wouldn't trade Brooks for him.

Shooting Guard
McGrady - He did everything we dream of him doing on a nightly basis. Get the rebounds that are near you, and the occasional one or two where you have a clear shot at it. Pass the ball well and often. Shoot the easy shots and you are allowed to shoot an occasional heat checker. This is how I want to define TMac from now on
vs.
Garcia - I haven't seen him play much in the NBA. I will always remember him for being the luckiest man alive for a 2 minute period when he fouled Darius Washington on a 3 pointer and somehow got away with it as the 80% free throw shooter missed 2 out of 3. That game faced two of the NCAA coaches I like the least in Calipari and Pitino.
Edge: Rockets: Come on now

Small Forward
Battier - He is the perfect SF starter on this team. With Crazy Pills on the bench to run the second team, Battier is able to spot up in the corner and drop bombs. He's also able to play defense while not getting in Yao and Tracy's way
vs.
Salmons - Holy crap, John Salmons decided to be good? 19PPG, 3A and 3 boards a game. Or is it more that the Kings are bad and he shoots 15 times a game? Let that sink in, Yao shoots 13 a game on average.
Edge: Rockets: I don't expect Salmons to have 20 points against the Rockets

Power Forward
Luis Landry - The tandem have had a rough last two games, after dominating together in the Golden State win. This game will bring out the best in both of them.
vs.
Hawes - He's tall, white and Jon Koncak like. I can't decide if that is a compliment or not
Edge: Rockets: Hawes has the size. Luis Landry has the awesomeness

Center
Yao - In December Yao is averaging 60% from the field for 24.3 PPG and 11.6 rebounds with 2 assists and 2 blocked shots tossed in. If that wasn't good enough, he's shooting 84.7% from the line. He's awesome, don't ever forget that.
vs.
Miller - I've never been a fan of Brad Miller's. He is a fantastic passer and a solid shooter. But to me, he was more of a product of right place, right time in Rick Adelman's system. He's a good player, but Yao will eat him alive.
Edge: Rockets: Yao is good, actually, scratch that, Yao is fantastic

Key Reserve
Artest - In December, though he has missed three games. Ron Ron is averaging 21.5 points on 45% shooting, with 4 assists and 5 rebounds. The Rockets are unbeatable when he plays like that along with Yao and TMac on the court.
vs.
Thompson - The rookie from Rider is averaging almost 10 points and 7 rebounds in 25 minutes a game off the bench. I haven't seen the Kings play this year, but that looks pretty solid from a guy that was considered a reach.

Injuries
Houston Rockets
Who isn't injured? McGrady, Battier, Artest, Hayes and Alston are listed as Day to Day
OUT - Alston - The Kings injury plays into this, without Martin, there should not be a need for Rafer on Friday night

Sacramento Kings
OUT - Kevin Martin is listed as indefinitely on Day to Day, I'm not sure how that works but it looks like he is out for Friday's game. I don't like for players to get hurt, but I have no problem not having to worry about playing him. Frankly, he's awesome and I don't mind hedging any wins these days.

Team Blog: The unparalled Sactown Royalty where they have access to the team that we dream of.