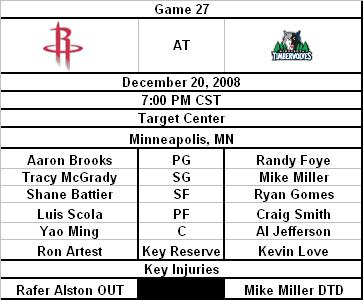 Point Guard
Brooks - He had a 5 to 1 assist/TO ratio against Sacramento, but was a little off on his shot. I think he'll bounce back tonight with about 16-18 points.
vs.
Foye - I still can't believe they wanted this guy over Brandon Roy. You can't be serious, can you Kevin McHale?
Edge: Rockets
Shooting Guard
McGrady - Why is Tracy McGrady so effective at times this year. It's not his shooting which is a career worst 40.4%. It's not his dunks, because he has no lift. It's his career best 81.8% free throw percentage.
vs.
Miller - Everyone wanted him as a Rocket last season, myself included. Frankly I'm glad we have Crazy Pills instead. While Miller can shoot, he's not a defender and he can't create his own shot like Ron Ron can at times (though you don't know if it will go in). It would mean that Shane or Ron was not here this year. I'm happy with what the Rockets ended up with
Edge: Rockets
Small Forward
Battier - Is it me, or is something wrong with Shane? He's never been a stats guy, and I know his ankle is hurt, but these are career worst type numbers that he is putting up. His defense has been good, but last year he played better defense than anyone in the league and he's about number 20 on that list right now. I'm telling myself it's just the ankle. Please just be the ankle?
vs.
Gomes - I have nothing constructive to say about Gomes other than he hustles, at least when he plays the Rockets.
Edge: Rockets
Power Forward
Scola - There you are Luis!! I missed you the last few games. 23 points on 10-21 shooting with 3 steals, 6 rebounds and an assist. Please never leave me again.
vs.
Smith - I loved this guy in college, but once again the rule is being proven, if you are 6'7 you really aren't an NBA PF. Why do 2 inches make such a huge difference?
Edge: Rockets
Center
Yao - I repeat, for anyone that didn't get the memo. He's the best, arounddddd. Think Karate kid song from the tourney, but without the karate references.
vs.
Jefferson - UNDER-Rated clap, clap, clap, clap, clap. This guy is a beast. It's a shame he toils away on this poorly constructed team with such a bleak future. I guess he'll have to cry himself to sleep on his $11MM
Edge: Rockets but this is one of the few guys in the NBA capable of playing close to Yao
Key Reserve
Artest - His ankle needs rest, frankly I hope he doesn't play tonight. If he doesn't, Carl Landry will be winning this edge too.
vs.
Love - Kevin McHale, you really traded OJ Mayo for a 6'10 white guy? Really? There is not another you out there no matter how much you want there to be.
Edge: Rockets
Injuries
Houston Rockets
DTD - The entire team
OUT - Rafer Alston looks like he will be back Monday or Tuesday