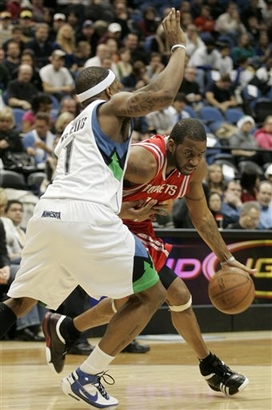 Summary: Whew, it's a good thing The 100 Rule exists, or we could have lost that one.  Surprisingly, Minnesota put up a decent fight, shooting 45% (which, for them, is like our shooting performance tonight, 53%).  Al Jefferson was Al Jefferson, scoring 34 points and grabbing 13 rebounds.  Randy Foye, after a miserable start, also contributed with 24 points, driving at will against our defense sans Yao.  But in the end, we made the key shots that we needed to make, and Tracy McGrady had a solid game.  Our insane FT% (95) also helped.  And we can still play great defense when we need a stop.

Aaron Brooks - Brooks had 18 points, a ridiculous 10 rebounds, and 5 assists in 31 minutes of playing time.  He was once again dynamite from behind the three point line and played good defense on Foye while he was in.

Tracy McGrady - Tracy had 23 points, 5 rebounds, and 5 assists.  It seems like he's found a comfortable 3-point shot on the shoulder of the three point line - his percentage is much higher this year than in years past, and he made 2 threes tonight.

Luther Head? - Hey, I'll take it.  Luther couldn't miss tonight, except for once.  He went 6-7 from the field, scoring 16 points.  It's nice to see him step up in a game that didn't see Yao's best performance.

Luis Scola - Luis only had 13 minutes of playing time after going 23/10 last night.  It would be nice to see a little more consistency out of My Friend From Argentina.

Interior Defense - Randy Foye and Craig Smith had far too many layups tonight, and even when we put Yao back in the game, the Wolves continued to drive successfully.  If there is one thing we need to work on defensively, it's getting teams out of the paint.

Boxing Out Mark Madsen - Any time we allow someone like Madsen to grab 3 rebounds is sad.  The guy shouldn't even be in the NBA.

For Minnesota - Signs this just might not be your night: Despite Minnesota keeping the game close, there were plenty of reasons why they weren't going to win.

The highlight of your night is when Grandmaster Flash's "The Message" comes on the loudspeakers.

Mike Miller goes out with an ankle injury six minutes into the game.

You're head coach is Kevin McHale.

Loyal Rockets fans who made the trip to Minneapolis are asking where they can find Coach Gordon Bombay.

Aaron Brooks opens the game with a pull-up three from Duluth.  Then Luther Head makes his first two shots, gets away with a five-step travel, and nets a three immediately after.  He also makes a layup, for once.

36 year old Kevin Ollie becomes your point guard in the first quarter after Randy Foye gets two quick fouls.  However, this may eliminate a flurry of bad shots, so it's easier to take.

In fact, the minute Foye comes back into the game in the 2nd quarter, he misses two wide-open threes and kicks the ball out of bounce, all on the same possession.  Then he misses a technical free throw.

As Bill Worrell noted, "It's so quiet that you can hear the ball bounce, the feet squeak, and the players cuss from your TV screen."  Probably due to the hundreds of fans in attendance.

Mark Madsen gets some playing time.

Rashad McCants played after the whistle after a foul was called while running on a fast break...and missed the wide-open "showoff" layup.

Bullard: Where was the defense for Minnesota?

Bullard: The referee said "white ball" and then pointed in the Rockets' direction.  Maybe he's colorblind and thought we were white.

Worrell: Actually, you can be colorblind and still see white.

Worrell (following a commercial break): Baby, it's cold outside.

Bullard: It's the dreaded and rare Double-Travel!