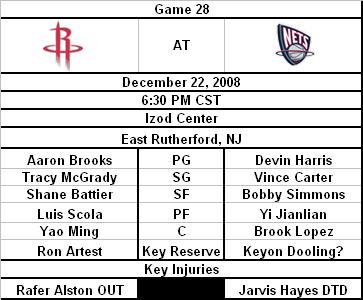 Point Guard
Brooks - He has fared very well in his two big tests as a starter so far. Now he is matched up with a guy with similar quicks, but more size. It is going to be interesting. I think Harris will get his, but Brooks will not let Rockets fans down. He knows this is his audition for the permanent starting job for next season. He is very driven
vs.
Harris - I've said it before, I'll say it again, the Jason Kidd trade for the Mavericks is a top 10 stupidest trade of all time. Harris is lighting it up in New Jersey. He can't win games by himself though, actually, since they have won 13, maybe he can.
Edge: Nets

Shooting Guard
McGrady vs. Carter - I'm going to put this into one. In the history of the cousin war, Tracy has dominated. You can look here if you don't believe me. 6 more points, more rebounds, assists, blocks, a better shooting percentage and less turnovers. I think Carter was unecessarily lambasted for being selfish for getting his degree (which is what he should have done), but sine then has decided that if they already think he's selfish, than he's just going to be selfish.
Edge: Rockets

Small Forward
Battier - Shane does everything better and costs 4 million dollars less a year
vs.
Simmons - For 10 million dollars you too can have a 7 points and 4 rebounds small forward!
Edge: Rockets

Power Forward
Scola - Tough night in Minnesota, and all four of his fouls were legit calls (unlike how he normally is called for 2 phantom ones). I don't understand why he ever gets less than 25 minutes a game though. He'll bounce back strong tonight, I have no doubt of that.
vs.
Jianlian - Not the next Yao Ming, not even close
Edge: Rockets

Center
Yao - If Yao scores 20 points tonight and grabs 23 rebounds he will be averaging a 20 and 10 for the season. His numbers have climbed up steadily all season long. The team is finally running the offense through him more often than not. I appreciate that.
vs.
Lopez - He's been shining brightly since joining the Nets. He's one of those rare players that seem obvious that they will be good pros even though they were overrated college players
Edge: Rockets

Key Reserve
Artest - Ron won the game for the Rockets against Minny. He could very well do the same tonight
vs.
Dooling - I have nothing to say here other than he has had a much longer career out of Missouri than I thought he would
Edge: Rockets

Injuries
Houston Rockets
DTD - Rafer is still DTD but I don't think he will play tonight. He shouldn't anyway. Better to have him back on the second night of the back to back against the better team.

New Jersey Nets
OUT - None

As of right now, the Rockets are on pace for about 55 wins. Is that okay with you as a Rockets fan? Did you expect more? Less?

This poll is closed