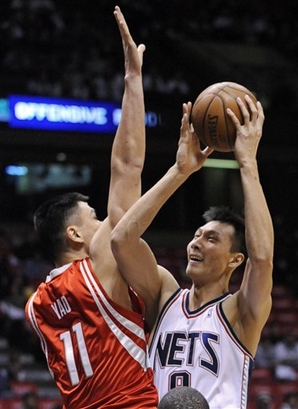 Yi Jianlian laughs as he realizes the absurdness of he and Yao's "matchup."

Well, that was fun.  It's nice to see us finally put someone away early and never let up.  Most importantly, the Rockets used their defensive matchups effectively, slowing down Vince Carter with a combination of Rawn and Shane Battier, and Aaron Brooks neutralized Devin Harris' speed, thus reducing him to a mid-range jump shot machine. However, what was even more impressive was our offense.  We shot 58 percent and made 9-19 three pointers, and any time that happens, we're going to win the game.  The Yao vs. Yi matchup, which is and will always be a joke, was dominated by the Ming Dynasty once again.  It was good to give our starters some rest at the end as well with a game tomorrow night.

Yao Ming -- I'm only going to borrow Basketbawful's new nickname of Yao once, so here it is:  "Shaquie Chan" had 24 points, 16 rebounds, 4 blocks, and went 8-8 from the FT line.  Another solid night from Yao; now he's going to need to do it vs. Big Z in Cleveland tomorrow night.

Aaron Brooks -- I wrote that Rafer's absence would provide Aaron with yet another opportunity to prove he is a starter in this league, and on this go-around, Brooks has come through with flying colors.  He went 22/6 tonight, and as Matt Bullard pointed out at the end of the game, he only had one turnover.  He's definitely going to give Rafer a run for his money by the end of the season.

Ron Artest -- Not the greatest statistical night from Crazy Pills, but his defense of Vince Carter was magnificent, and his ten points off the bench were still much-appreciated.  In a game like this, Rawn had one job to do, and he succeeded.  That's all anyone can ask of him.

The IZOD Center -- Really?  The arena is named after my golf shirts?

Guy Dancing in the Front Row -- If you watched the game, you probably noticed this old dude wearing a Hawaiian shirt that constantly got jiggy with it to all of the songs being played during timeouts.  Maybe he wanted to be like this guy.

Keyon Dooling Defense -- We gave up 17 points to Keyon Dooling.  Nothing much more to be said.  It's actually a good thing, but I couldn't think of anything else.

Nets Personal Fouls: 23.  The other refs must have ignored Violet Palmer's numerous attempts to screw us.

Quote of the Night:  From the Shanghaiist:

Yao is focused on leading a surging Rockets team that is a serious playoff contender, and seems to see Yi and the Nets as just another opponent that needs to go down.

The Nets are an opponent that "needs to go down."  Classic Shangahiist, am I right?

Real Matchup of the Night:

Tiger vs. Tiger, aka Dorsey vs. Douglas-Roberts.  Dorsey enters the game, throws down a dunk.  CDR throws an alley-oop to Josh Boone and hits two jumpers while Dorsey is on the floor.  If only we could have seen these two go at it for 40 minutes and not Yao-Yi.