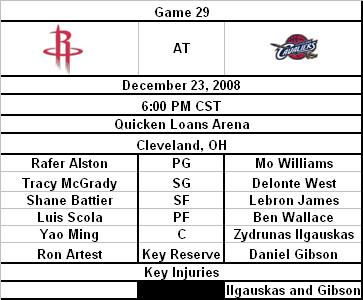 Point Guard
Alston - Rafer will be back tonight, and according to Rick Adelman, he will start. This is not a good decision, but it is what it is.
vs.
Williams - Mo Williams was vastly underrated in his previous life. In his life as Lebron's sidekick I'd say he's still underrated. Lebron has done less this year than last, but the Cavs are infinitely better. Mo Williams is the reason for this
Edge: Cavaliers

Shooting Guard
McGrady - Over his last five games he is averaging 18 points, 6.5 rebounds and 6 assists. Also know as exactly what we need from him. Some of that is skewed by his triple double game, but for the most part he is doing what he needs to do.
vs.
West - I've been on his bandwagon since his last year in college. The guy can score, plain and simple. He's not going to rebound, pass or play much defense, but he will score. And he's doing it better and better with each game in Cleveland.
Edge: Rockets

Small Forward
Battier - His words, after blowing an 18 point lead to Minnesota, could very well be the catalyst for the rest of the season. I can absolutely see that leading the Rockets to a victory tonight. It certainly was part of yesterday's blowout win.
vs.
James - His numbers are down across the board from last year, but somehow he's playing better, smarter basketball. He's still the best (or second best if you are a CP3 guy like me) player in the NBA. He's leading his team through words and actions. And while I think his teaser about signing an extention this summer was a marketing move to keep his guys together for this championship run, it was still a really smart move.
Edge: Cavaliers

Power Forward
Scola -
vs.
Wallace - From underrated to vastly overrated to underrated again. The Fro does much better as an underrated player. A third or fourth fiddle is the perfect spot for him in the band. He doesn't play peremiter defense as well as some think he does, but he is a good defender.
Edge: Rockets

Center
Yao - The Yao, 20 and 10 watch continues, he raised his scoring to 20.2 and his rebounds to 9.8. Tonight he needs 20ish points and 16 rebounds to get there. I'm saying he does it.
vs.
Ilgauskas - He usually plays Yao very toughly, though the last 4 games Yao has taken it to him. Tonight likely won't be different. Z cannot guard him one on one, and if Wallace doubles off, Scola will constantly drain 12-15 footers
Edge: Rockets

Key Reserve
Artest - If Ron comes off the bench the rest of the year, he could very likely win the 6th man of the year title.
vs.
Gibson - He's only been back for 1 game from a toe injury. He's not particularly a match-up problem for the Rockets, but does require a constant eye on him. His shooting can be lights out, or all over the place. I still wish he had stayed one more year to play with DJ Augustin and Kevin Durant.
Edge: Rockets

Injuries
Houston Rockets
OUT - None, that's right none. Can anyone else believe it???

Cleveland Cavaliers
While Big Z and Boobie are listed as DTD, they are expected to play.
OUT - None