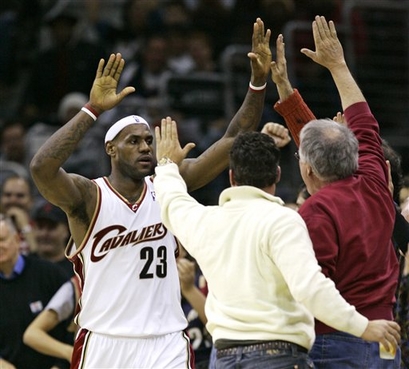 Summary: Let's be honest: this had the makings of a great game.  It still was a pretty good game.  But if there was any knock on it, it was the microscope that the refs had on Yao Ming.  Cleveland fans (or casual Houston fans) might say, "Well Yao didn't even foul out, Zydrunas did!"  What they don't realize is that Yao got called for some petty bullshit fouls, fouls like raising his arm too high when Anderson Varejao hooked him or being 3 inches away from the center of LeBron's body so he could take a legit charge - at least Zydrunas was slapping people and actually earning fouls (if that's any consolation).  For Yao, a few of the calls on him were "makeup calls."  True, they may have evened out bad calls on the other end of the floor, but the calls on Yao affected us to a much larger degree and didn't have to be whistled.  In a game of this stature, the refs needed to keep the physicality from escalating to chaos, but the last thing they needed to do was completely remove Yao.  Anyway, with Yao out, Rafer Alston stepped up, and our defense played pretty well, forcing LeKing to turn the ball over seven times and holding one of the top scoring teams in the NBA under 100 points.  Problem is, when Rafer Alston leads the team in scoring, we aren't going to win many games.

Rafer Alston -- Stepped up big in Yao's physical absence and in McGrady's statistical absence.  He made his threes and was able to drive in the lane, all of this in his first game back from injury.

Ron Artest -- Say what you want about Ron's shooting performance, but he made three 3-pointers and played well on LeBron, despite his third quarter outburst.

Luis Scola -- I thought Scola played pretty well.  He went 11/8 and was able to get us some key baskets in the early-going, when most of his statistics matter.

Tracy McGrady -- When Yao went out with his second foul, I thought to myself, "This is when T-Mac needs to take over."  Well, he didn't, to say the least.  He had a horrible statline, and those 6 assists came due to wide-open players when the Cavs would double.  I think McGrady could have come up big tonight, but he didn't.

Carl Landry -- Landry picked up 3 quick fouls and had two costly and boneheaded turnovers during his short time in the game.  He could have filled in for Yao nicely as well, but failed to come up big.

Yao Ming -- I really hate to say anything bad about Yao given his "preferential treatment" in this game, but on three straight possessions, he missed shots that could have easily kept us in the game late.  Granted, he was excellent from the free throw line, but he only went 3-10 from the field, and let's face it, some of those fouls were legitimate.  Can't put too much blame on him for this one, though.

Cleveland Free Throw %: .882 (one of the few times the Rockets will be out-shot at the FT line this year)

Worrell: He's 0 for the season.

Mo Williams -- I thought Mo Williams could be neutralized in this game, but he played extremely well and hit some key shots down the stretch to solidify the win.  I don't like to give opposing players too much credit, but I've admittedly been a Mo fan for a long time.  Props to him, he's underrated and hopefully will garner some respect in the league.  Hate to see him play well against us, though.

Big Z For Three: I told you it would happen.  And dammit, it pissed me off.