Share All sharing options for: AVB: Alston vs. Brooks - The Rockets PG Debate 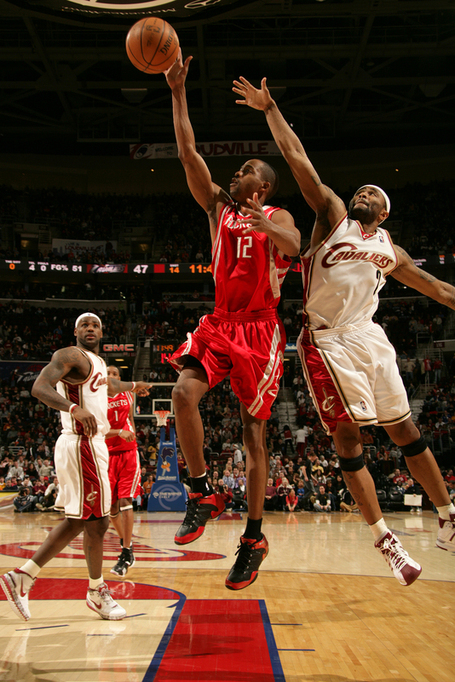 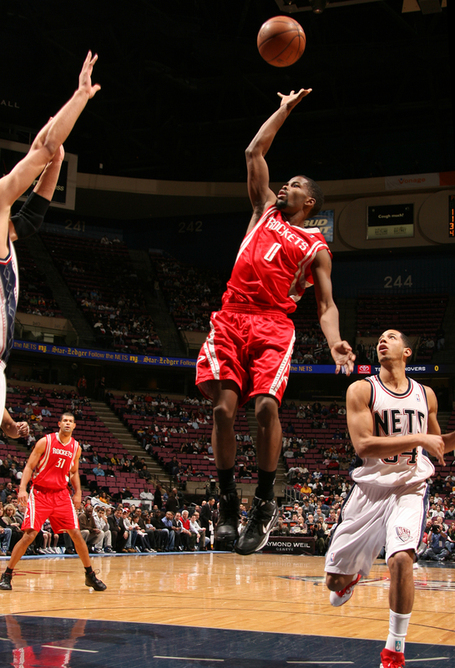 Many Rockets fans, including myself, have found something new to bicker about this season.  In the past, it has been either about depth, coaching, or injuries.  But with the emergence of Aaron Brooks and the continual suckiness of Rafer Alston, a new topic of debate has been triggered:

Who starts:  Alston or Brooks?

While it may be easy at first glance to choose Aaron over Rafer, the fact of the matter is that Rick Adelman hasn't seen things that way, and despite Rafer's suckage, he has maintained the starting job and we still manage to win some games with him.  So let's take a deep statistical look at how each player has impacted the Rockets thus far and try to shed some light on who is the better fit for us as a starter.  I'll try to accumulate as many statistics as I can, and then you can decide what to do with them.  Hopefully, this won't be a giant waste of time you'll be able to find some statistical information to back up any claims.  Off we go.

While the team's win/loss record cannot be solely attributed to Rafer or Aaron's performance, it does provide some insight, especially given that they both play point guard, an instrumental position.

Tough to compare the two given the difference in games started, so let's look at the opponent.

Based on each's overall stats...

Let's look at John Hollinger's PER ratings for each player:

I for one think that Hollinger's system has plenty of flaws, but to be honest, it is a pretty good indicator of scoring output.  Take Paul Milsap of the Jazz.  Everyone laughed at his high PER rating among some of the better-known names, but as soon as he started in place of Carlos Boozer, there was no drop-off in PER - he put up double/doubles in every game.

It would be too easy to simply look at steals and blocks and say, "Oh, well Rafer is clearly the better defender."  While Alston does have higher numbers in those categories, his high minute numbers will definitely give him an edge there.  To add to that, let's see how each starting point guard fared in the six games that Brooks has started this season:

Overall, it seems that Aaron Brooks can step up on defense and cause an opposing point guard to play below average.

It's tough to statistically break down Rafer's game-by-game performance because Brooks was also playing during those games.  However, we can look at Rafer's performance against OJ Mayo, a game in which Brooks didn't play.  Mayo shot 5-20, and had 10 points.  But it was his first NBA game, so, whatever.  Traditionally, however, Rafer is a good defender, and so far in our analysis, he and Aaron cannot be differentiated in terms of defense.  Aaron's ability to defend backs this stance up.

This may be one of the best indicators of who plays better.  Let's look at the teams and/or point guards that both Rafer and Aaron started against.  The San Antonio game won't count because Tony Parker started versus Rafer.  I'll repeat Aaron's defensive statistics for each team:

So what can we take from that?

Well, we've seen a lot today.  But if you had to ask me to choose a player that I would rather have start for me, it would be...

Normally I hate to defer to the young gun in a decision as close as this, but it's obvious that we win with Aaron in the lineup.  He's a much better scorer, is more consistent as far as shooting goes, and while he may not put up the same kind of assist numbers that Rafer does, the Rockets have still put up 20+ combined assists in all but one of the games that Aaron has played in, and our stretch of four straight 100 point games began and ended with Aaron in the lineup.  Defensively, I still think it's a coin toss, but Aaron definitely defended the opposing player better in the head-to-head assessment.  Finally, I think that Rafer would make a great backup point guard.  Someone that could come in off the bench and know how to run an offense, but also someone that you could yank out of a game with good reason the minute he started to screw things up.  You don't normally do that to starters, unless you are the Dallas Mavericks.

My suggestion is to try out Aaron for a few games even while Skip is healthy.  See what happens.  And it would be smart to do it now when the season is nearing the half-way point and not late in the year when we need big wins.

Lastly, even with a look at all of these stats, I could have had Dave (or anyone, for that matter) simply state the obvious by writing a four word article reading: "Rafer sucks.  Start Aaron."

But that would be too easy.  Now you have some actual proof.  Feel free to add to what I've said in the comments section.