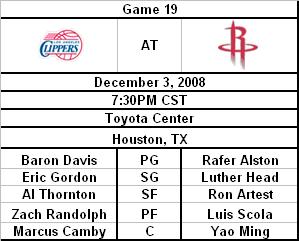 Alston vs. Davis: Davis hasn't been everything the Clips thought they were getting completely.  Most of that is because Mike Dunleavy has absolutely no idea how to use him.  He's a run and gun player that is made to massage the ball in the Clippers offense.  As a Davis fan, it's absolutely infuriating.  It's part of the reason I didn't want him here under Van Gundy, it just isn't the right fit for him.  Rafer Alston is the 39th point guard statistically in Hollinger's PER.  Now I do not believe in any way that this is the perfect statistic, it does come really close for the PG position.
Edge: Clippers: It's not close

Head/Battier vs. Gordon: I'm not sure why Gordon didn't start from day 1 for the Clippers.  They don't exactly have a better choice at SG.  He's played reasonably well this season with some great games, and some clunkersas well,  built in.  Game 3 of the Luther Head experiment happens tonight.  With Shane Battier back, it's likely that he doesn't see anywhere near the minutes he did in the last two games.  I'm hoping Von Wafer gets a few more shots at the court.  And if not, I'm hoping "Home Luther" comes to the game.
Edge: Even:  Shane will play enough here to even this out

Artest vs. Thornton: Thornton is a better player than I thought he would be at this point in his career.  I always thought he would be good, just not quite this good.  He still lacks a bit on the rebounding side of the game and I'm  very afraid that he is going to pick up on Marcus Camby's defensive habit of gambling everytime down the court, but here's hoping Camby becomes a Rocket soon and it's not a problem for him.  (It's not going to happen, but one can dream!)   That type of play works for Camby, but it's really hard to get away with and very few can do it.
Edge: Even: I would have given this to Ron Ron, but let's be honest with ourselves, he hasn't played very well overall this year.

Luis Landry vs. Randolph: I'm not convinced that Zach Randolph the good player is completely back.  He has put up some really nice numbers this year, but he's a jack ass of epic proportions and from everything I've ever read or seen, he's not exactly a good guy when things aren't going well for him.  Right now it's all new though, so maybe he'll turn it around.  His game can mesh
Edge: Clippers:  Randolph can not keep up with either of these guys on the defensive end but unless the minutes are doled out where they actually try to guard him, we'll be seeing a lot of Chuck Hayes.

Yao vs. Camby: Camby is very overrated as a defensive player.  That's not to say he's not fantastic on the defensive end.  He just has never at any time been one of the best 3-5 defensive players in the league.  That said, he'd be the best possible addition to the Rockets in the entire league.  At least in the realm of reasonableness.  Yao has steadily moved up the charts statistically.  The Clips will surely front him tonight, I'm interested to see if the team got off their butts and worked on how to play that time of defense.
Edge: Rockets: It hurts that I have no reason to post the Yao/Kaman clip again