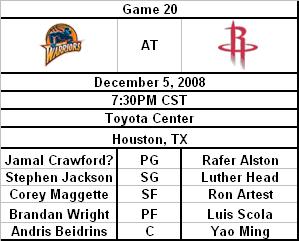 I usually try to go through old box scores to see how the other team is starting their players when I do the previews. I have to be honest, I have no idea what is going on with Golden State. This team is probably put together more poorly than any team in the league right now. I like a lot of their players individually but few of them should be on the same team. I feel bad for Warriros fans, they are some of the best around and this is just not fair.

Alston vs. Crawford: Crawford is still fitting working on fitting in, but scoring is something he is very capable of and that's what the Warriors want from him. I expect him to score a lot this season, but still not play defense. Rafer Alston has played borderline well the last 4 games. His shooting has been better and he is distributing the ball. He's still having a bad overall season. But maybe something has clicked? Maybe he's finally getting those shooting reps in that he didn't in the offseason due to surgery? One can always hope.
Edge: Rockets: They don't actually employ a starting PG on the Warriors right now, so I'm giving the nod to the Rockets even though Crawford is clearly the better player

Head/Battier vs. Jackson: I love Stephen Jackson. There I said it. He's a fantastic basketball player, albeit also crazy in the head. He's also a Texas guy, so I have a soft spot in my heart for him. He can completely dissapear, as he has in his last two games going 2-11 in both, but most nights he's there for you. I'm not sure who is going to start tonight. I truly believe that Battier and Alston should not be in the lineup together most nights, but this night, with the Warriors brand of ball, they probably should be. Head put up his usual 1 to 1 A to TO ratio last game but he did hit a few big shots. This game just isn't the right one for him to start
Edge: Warriors: It's not by much, but it's an edge nonetheless over Battier

Artest vs. Maggette: You think Maggette is wishing he signed with any other team in the league? San Antonio is looking pretty good, isn't it?
Edge: Even: Maggette is their best player, but historically he and Arest have played to a standstill.

Luis Landry vs. Wright: Wright should be a good player in this league. He's not ready for Scola's savvy or Landry's power though. He will have height, but he's 6'1- and only weighs 210
Edge: Rockets: Clearly

My Prediction: I don't remember when I said I'd start prediciting outcomes again, but it wasn't game 20. Can you believe the season is almost a quarter of the way through? My only predicition for tonight is that Yao will score, and score a lot.