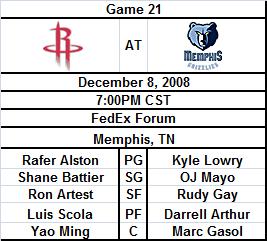 Alston vs. Lowry:Recently Kyle Lowry was named the starter for the Grizzlies and has not done much. He didn't have to perform too well as Mike Conley wasn't lighting the world on fire either. In the last 4 games Rafer Alston has played like he did for stretches last year where he didn't look like a bottom 10 point guard. I've said it many times, when he plays like this, it's hard to be upset with him. 14 shots may be about 4-6 too many on the surface, but those were in games the Rockets topped 100 points, it's more than okay, especially when shooting around 47% from the field in those games.
Edge: Rockets: Did I just type that? I did!

Battier vs. Mayo: Shane Battier will shut Mayo down tonight, mark it down.
Edge: Rockets: Higher ceiling goes to Mayo from day 1, Welcome to the game against the guy that doesn't allow vaulted ceilings on his court

Artest vs. Gay: Ron Artest seemed to find his shot against the Warriors. And it's not like they weren't in his face at all, he was just finding a way to get his shot up. What I've really noticed about him as a Rocket is that he is fantastic at finding the open man. His passes aren't as crisp as Tracy McGrady's but he finds the open man more often. Rudy Gay is scoring 19 points on one of the worst teams in the league. I've never been overly impresses with him and think he just coasts too much. I for one still love the Battier deal.
Edge: Rockets: There has to be a joke here

Luis Landry vs. Arthur: I have really enjoyed that the combo plays off each other so well. When one isn't having a great night, the other does. When one is having a solid night, the other does. 20 points and 12 rebounds a game is pretty nice from what amounts to a combined 3rd banana, or 4th with Tracy around. I like that. Darrell Arthur's minutes have gone up and down all year. Hakim Warrick, a guy that I thought would be better than he is, has taken a lot of those minutes. Arthur has NBA size and skill, it's just a matter of time.
Edge: Rockets: Arthur is going to be darn good, but he's not ready for this jelly

Yao vs. Gasol: You mean they didn't trade Pau Gasol for nothing? Obviously it was a wink and a nudge deal, but frankly I don't think the elder Gasol is anywhere near as good as others think he is. Marc Gasol has played well to this point and has a lot of the same ability. Plus, they got Kwame Brown! Yao played about as good of a fourth quarter as humanly possible the other night. The team found him and the referees actually called about a quarter of the fouls that occured (as opposed to the 1/50th they usally call for him). It was a great performance.
Edge: Rockets: Squint your eyes at me will you Gasol brothers and Spanish National team, time for an ass kicking