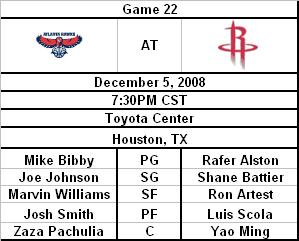 As far as I know, the Hawks are without Al Horford for tonight. I'd say that is a good thing, but it means that there are a few small athletic guys attacking Yao from the PF slot.

Alston vs.Bibby: Mike Bibby is the perfect guy to run the Rockets offense. Unfortunately the Hawks traded for him and we didn't. Rafer has been solid, I'm not complaining (right now) but he's not Mike Bibby.
Edge:Hawks: Clearly

Battier vs. Johnson: Joe Johnson left the Phoenix Suns for absolutely no reason. That said, I'm betting he's happier now in Atlanta though. He's a top 20 player in the league, easily and one of the most fun guys in the league to watch. I'm assuming Artest is back tonight as the Rockets said he would be, so Shane is at the 2 again. This is exactly what he's supposed to do, and with a second scorer tonight he should be able to concentrate on Johnson without worrying about scoring.
Edge: Hawks:Shane is great, but not a top 20 player, no shame here.

Artest vs. Wiliams: Marvin Williams has turned out to not be a bust, but he still hasn't lived up to his top 10 pick billing. He's playing SF/PF on this team when he's really a SG in my opinion. That should be okay with the offense the Hawks run however. I think everybody saw how much this team depends on Ron Ron last night. They couldn't stop the bleeding on offense because he wasn't there to get other guys open. And they couldn't stop it on defense because he wasn't there to body Mayo or Gay. Hopefully he is back as expected.
Edge: Rockets: Ron >>>> Marvin

Luis Landry vs. Smith: Josh Smith and Marvin Williams are pretty much interchangeable from what I've seen. I'm not sure how either of them can play PF even though they are 6'9. Can you see McGrady playing PF? No, me either. That's not their game. However, like Williams at SF, this fits into the Hawks offense. His athleticism allows him to play with stronger players. Actually, the more I write about this Hawks team, the more I like them. The Rockets aren't running enough offense through Scola and he, as usual, has to get bloody to get a foul called (cut the hair Luis, that has to be it). He and Landry continue to do their jobs and do it well. They were clearly not the issue in Memphis last night.
Edge: Rockets: By position alone, Smith isn't a PF, Luis and Carl are very good PFs, this shouldn't be a contest.

Yao vs. Pachulia: If Yao doesn't dominate tonight I won't know what to say. Last night he was just out of sorts. He would get position only about half of the time and wasn't forcing his teammates to rotate the ball out of the front. It was really strange. His positioning for boards was not Yao like, I expect that to change after review of film on the way to Atlanta last night.
Edge: Rockets:It doesn't matter if it's Zaza or Al Horford, Yao's obviously the better player