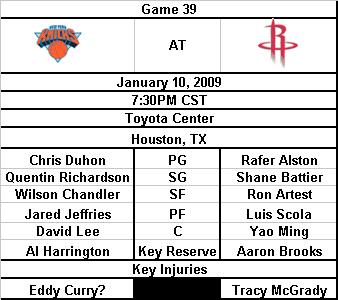 Point Guard
Alston - Bunny Lebowski made one shot last night. One. Bob Uecker would have gotten an FCC fine if he broadcast the Rockets' game last night. That said, maybe he truly is in a shooting slump. And maybe he's the key to the Rockets extending their winning streak to 3.
vs.
Duhon - Duhon has been the recipient of the statistical bump that all point guards get in a D'Antoni system. That doesn't necessarily mean he's good. It just means he's less of a cancer than Stephon Marbury. In fact, I think Rafer might actually be better than him. By a wide margin. (Plus I hate Duke.)
Edge: Rockets and Rafer

Shooting Guard
Battier? Wafer? - I have no idea who plays shooting guard for the Rockets tonight. Not. A. Clue. I'm hoping that the extended break makes Shane eager (but not too eager) to return to the court. I only want a healthy Battier to play right now. He needs to be healthy in April/May. That's the priority. And if Battier doesn't play? Von Wafer has been really good. 15 points a game good over the last 6 games. I'll take that from the guy that was the 12th man entering the season.
vs.
Richardson - Q is happy to be back in a D'Antoni system. But it would be nicer if he had Steve Nash to help feed him on 3s. But he's still quite the serviceable NBA player, so we can't ignore the fact that Q can score the ball if he has to.
Edge: If Battier plays... Rockets. If Wafer plays... I'll call it a draw.

Small Forward
Artest - Crazy Pills is silently doing the T-Mac thing. On one game. Off another. It's infuriating, but I also respect that RonRon is actually hurting. And I mean seriously hurting. Remember, he is a Tru Warier.
vs.
Chandler - Who? I'm not even sure this guy could make the Rockets' roster, and yet he's one of the best players on the Knicks right now. Which says a lot about how good a coach D'Antoni is... and also how bad the Rockets are underachieving.
Edge: Artest and the Rockets. And it's not close.

Power Forward
Luis Landry - Scola was huge in the 2nd half last night. HUGE. Carl Landry was probably the only Rocket not named Von Wafer who actually had a good road trip. Landry needs more time on the court. Do you hear me Coach Sleepy!??!
vs.
Jefferies - I'm not sure he could make the squad at Indiana University right now. And here he is... starting for the Knicks. The NBA: Where stuff like that happens.
Edge: Luis Landry. This is no contest.

Center
Yao - Yao has not been playing well. Aside from his 2nd half in the Celtics game, Yao has been somewhat of a liability. Sad but true. This is the first week I think I've ever said anything negative about Yao. Then again, every time he scores 20 points, the Rockets seem to win. Kinda like the 100 rule.
vs.
Lee - The Knicks keep trying to trade him. I have no idea why. He's actually good. And he's going to give Yao fits. But Yao is still going to get 25 tonight. Yes, I said it. Yao is going for 25/12 and 4 blocks tonight. The chickens is comin' home to roost, y'all. David Lee is going to pay.
Edge: Yao. And he better not prove me wrong.

Key Reserve
Brooks - Worrell claims the shooting slump is over. I'm not so sure, but Brooks did look much better last night. And he's getting more opportunities to close out the game. Not sure if that is by design or if Adelman is just napping on the sideline. Either way, it's good for ABZ.
vs.
Harrington - This guy is the guy to watch out for. He's been on fire since he was given an early release for questionable behavior from Golden State. If the Rockets continue their soft perimeter defense, Harrington could put up 30 tonight. Beware.
Edge: I'll call it a draw... the Rockets' injuries and general malaise might get trumped by the Knicks SSOL offense.

Injuries
Houston Rockets
OUT - Battier? Artest? McGrady? Who the hell knows. All I know is that the Rockets will be short-handed in some form or fashion.

My Prediction: Rockets win by 10, 105-95. Home cooking is what we need. I hope. After last night's escape against the Durants, the Rockets need to find the killer instinct. Today would be a good day to locate it.