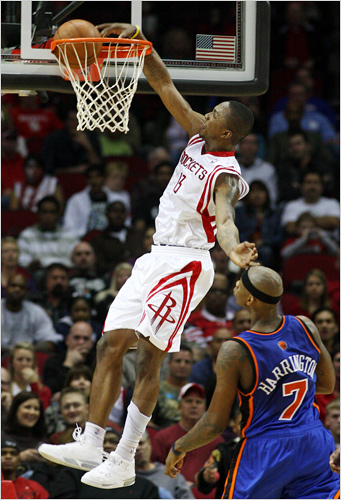 No Ron Artest, no Tracy McGrady...(get ready for it)...no problem.  The Rockets finally took care of business against a weaker opponent, and in this rare case, it was the poor-shooting Knicks.  Up until the third quarter, it was a close game at 46-45.  But for once this season, the Rockets actually won the third quarter en route to completely out-running New York.  Who knew?  It was a balanced effort as well, as five players reached double figures.  There's no place like home.  And no opponent like the Knicks on an off-night.

Von Wafer -- Hawk continues to prey upon the opponent: he scored 14 points and grabbed seven rebounds.  While he only shot 1-4 from three, it's good to see that he can put up points elsewhere.

Luis Scola -- My Friend From Argentina was on the boards again, this time going 18/11.  Consistency is always appreciated despite the Boston game.

Yao Ming -- He played 25 minutes, took only 8 shots...and made seven of them.  He also didn't shoot any free throws, but this isn't a night to complain.  Yao played well and there's no point in digging any deeper into the subject.

Luther Head -- Luther became a Trillionaire tonight.  Congratulations to Luther and his family.

Al Harrington -- I normally don't pick on the other team, but 1-10?  Ridiculous.  There can only be one Rafer Alston!

Pacman Jones -- Apparently, the Pacman was caught on tape in ANOTHER shooting a year or two ago, and the evidence has just now been released.  What an idiot.

The Knicks: This season, they are 0-18 when they trail after three quarters and 1-12 when they score fewer than 100 points.

Next Game: Tuesday vs. LA Lakers.  I've got tickets!!!