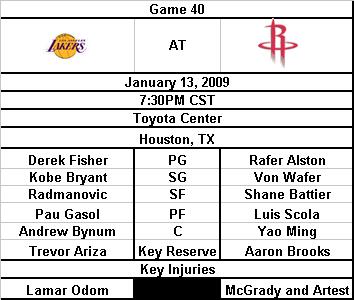 Point Guard
Alston - It's official! We're 40 games in and I've run out of ways to say the same thing
vs.
Fisher - He'll probably look like an All Star tonight until Aaron Brooks is in and he isn't nearly fast enough to keep up with him
Edge: Lakers

Shooting Guard
Wafer - Does anyone else get the feeling that he is playing the role of Robert Horry on this team? Big athletic play when it's needed, getting better on defense and can hit the clutch shot? I like this, I like this very much.
vs.
Bryant - Up to this year Kobe was the best player in the league. Now he is the second best as Lebron finally has a team. He's still a top 15-20 player of all time, so he has that going for him, which is nice.
Edge: Lakers

Small Forward
Battier - Battier will likely play the 2 on defense and the 3 on offense. He said that this is the best he has felt all season. Mr. Kobe Bryant, you have been warned.
vs.
Radmanovic - He plays his role very well with the Lakers. One of those guys you forget about then he has 18 points and 7 rebounds when you weren't looking.
Edge: Rockets

Power Forward
Scola - He's going to come up huge tonight. Gasol doesn't play defense, don't let anyone tell you differently. Scola could have 22 tonight
vs.
Gasol - I've never been impressed, though I'd be lying if I said I didn't think he was a great player. He just doesn't do the things that I like from a player with his skill.
Edge: Even - Just wait and see

Center
Yao - Yao takes these games seriously against the up and comers. Prepared to have 7 points, 8 rebounds and 5 blocks Andrew Bynum
vs.
Bynum - And even then I promise you all Lakers fans will do is say how close he was to a triple double and possibly domination Yao!
Edge: Rockets

Injuries
Houston Rockets
OUT - Tracy McGrady is out for 2 weeks, Ron Artest is out for at least 1

Los Angeles Lakers
Lamar Odom is likely out
My Prediction: Rockets win 89 - 83, for 4 in a row