Share All sharing options for: Q&A with LA Ball Talk

Before tonight's game with the Los Angeles Kobes Lakers, we had the good fortune of exchanging a little Q&A with one of the leading Lakers blogs, LA Ball Talk.  We each sent out five questions about the teams and the matchup.  Here's our questions to them (and their answers are in purple):

1. Sasha Vujacic is often given a lot of attention as a solid three-point shooter and bearer of one of the Association's great nicknames: The Machine.  However, his production has dipped significantly this season, at least statistically.  Having not seen many Laker games this year, could you describe if this is merely Sasha suffering from other players such as Trevor Ariza and Lamar Odom getting more minutes off the bench, or is he simply not playing up to his potential?

Sasha started the season with little playing time with Phil Jackson mixing and matching various lineups trying to figure out whats best. On December 28, Sasha had his breakout game of the season scoring 17 points in 31 minutes. The reason Sasha has had difficulty in staying on the court is because the Lakers are so deep as a team that if one particular player, Sasha for example, isn't playing exceptionally well, you can swap him out for someone else that will provide more production in that time. gives all his guys opportunities but they have to prove they are worth the minutes. Trevor Ariza is definitely Phil's number one option off the bench, the only problem is that Ariza's ability to shoot the three ball is slighlty below par. Vujacic and Radmanovic really spread the floor a lot better in order to create room for the big men to operate on the inside.

2. How do you think Lamar Odom has adjusted to his new role as a bench player.  Would you rather have him start?

I think/always thought that Lamar was well overpaid for who he is. I defined him as a slightly above average player with great versatility but little IQ. He has all the talent in the world, but doesn't know how to put it to work. Lamar is the type of guy that can play any position, from the one to the five, and be good at it. As a starter, there was pressure on Odom to perform. He must start the game off by creating some plays for himself and his teammates. The issue truly lies in the fact that Lamar's game is not one build for the triangle offense, or any structured offense at that.

As you watch the game between the Lakers and Rockets you will notice the Lakers run two different offensive systems. Of course it's a lot less apparent since Farmar and Odom won't be playing, but you should notice it either way. The starting lineup with Fisher, Bryant, Radmanovic, Gasol, and Bynum run the triangle offense. Off the ball rotations from weak side to strong side and vice versa non stop until they finally find the right positioning for the easy shot. The bench comes on as a unit generally and is a lot less structured. The young guys run their offense more through pick and rolls, screen and rolls, give and gos, and just free "D'Antoni" type offense.

To put that all together, when you mix a free flowing offense with Lamar Odom's lack of basketball IQ, he fits in better with the bench. He should be a front runner for the 6th man award this season and would rightfully deserve it. I believe the main concern pre season with Lamar was that his people wanted him starting for reasons other than basketball minutes. Odom is in a contract year and currently making $11.5 million per season. If he is coming off the bench, there is no chance anyone will pay him over $10 million after this year. In my opinion, he wasn't worth more then $8 million max in the first place.

Bynum = young, unestablished, searching for signature moves, solid back to the basket game, great pick and roll game, solid rebounding, on the rise.

Andrew Bynum cannot compare to Ming yet. Although young Andrew's game is beginning to come together on the offensive end, and he's a force to be reckoned with on the defensive end, he has a lot of work to do on his game in general. Lots of polishing and lots of developing. He has no signature offensive move that is highly likely to result in a basket for himself. Bynum does however have one thing going for him. Every game he seems to develop a little bit more anger and determination. Everytime he steps on the court he looks just a little bit more motivated to hit 20 and 10. His last 3 games have been great and hopefully he's able to continue his strong game while the Lakers enter their hardest 4 game stretch of the season against the Rockets, Spurs, Magic, and Cavs. 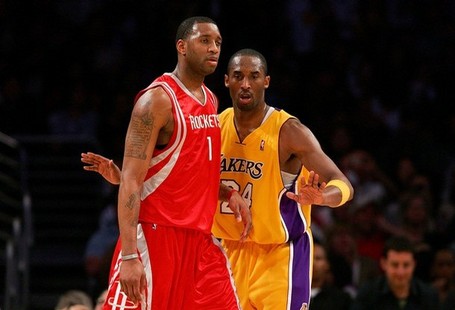 4.  Who is thanking today for the Lakers holding firm and not trading Andrew Bynum and draft picks to acquire Jason Kidd (or Jermaine O'Neal or Vince Carter)??  Is it Mitch Kupchak?  God?  Buddha?  Those kids with the handheld video camera?  Stephen A. Smith?  Jim Gray?  Jerry Buss?

isn't thanking anyone. Would have won a title with Kidd in 2007? Probably not. But he hasn't won one yet with Bynum either. Making it to the finals was a great achievement and the future looks very bright. The talks about Jermaine O'Neal were never really serious in terms of Andrew Bynum, it was Lamar Odom that the Lakers were trying to surrender for him. In regards to Vince Carter, that was all crazy rumors that would never have happened. Back to the main point though. The fact that the Lakers made the finals last season has little to do with Andrew Bynum. Actually Bynum's only involvement in that is going down with an injury that forced Mitch Kupchak to make the move for Gasol. Kupchak later said that if Bynum were healthy, the teams wouldn't have considered taking on this muche extra salary from Gasol. Now, with two big stars in the paint, the Lakers have a great chance at dominating their competition. What's it going to take though? I'd say determination, hard work, and some mean mean faces are a good start! Get angry Drew! 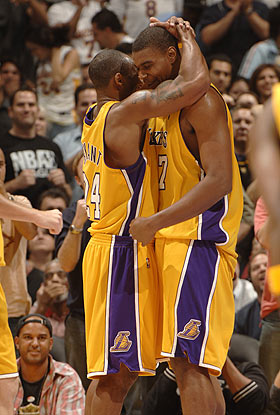 5.  Aside from , who is the one player the Lakers cannot afford to lose come playoff time?

Realistically, if goes down, the Lakers have little chance. If Kobe is down and another player would go down, Trevor Ariza would be the worst to lose because he is the one most capable of filling in for Kobe in time of absense. His ability to create plays, slash to the hoop, and defend would be huge in 's absense. If is in though, and we're picking a different player to lose, Gasol would be a bad loss. He creates so much for the Lakers with his size on the defensive end and great shooting on the offensive end. He has lately been a rebounding monster, coming up with 18 boards against the Heat the other night. He recently had his first off night shooting, but even then, managed to score when it mattered most. It's rare to find a seven footer with this type of shooting touch. With all that said, PLEASE GOD, DON'T LET ANYONE GET INJURED!

our answers to LA Ball Talk's questions can be found HERE!