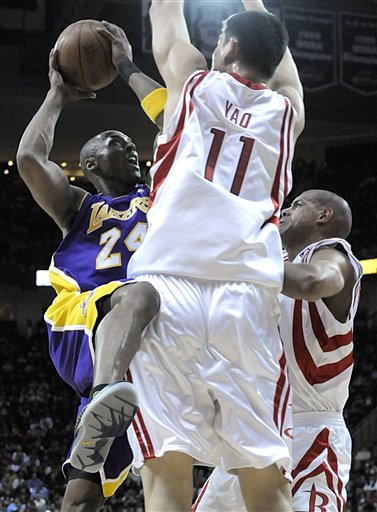 Kobe Bryant attempts to shoot over Yao Ming during the Lakers' 105-100 victory over the Rockets Tuesday night.

It's not like this wasn't a great game, because it was.  The fourth quarter was neck and neck all the way to the end, and after Battier's three-pointer that gave us a one point lead with thirty seconds left, I was going nuts in my upper deck seats at Toyota Center.  And even after Kobe Bryant hit a three-pointer to give the Lakers a two point lead with 8 seconds left, I was still confident.  We had Yao on the floor, ready to take the last shot.  We had Von Wafer in one corner and Shane Battier in the other, just in case Yao didn't have room to get a shot off.  Heck, even Carl Landry was hot this game and could have been open off a double-team for a jump shot.  But then something terrible happened.  Something that nobody saw coming, and yet, when it happened, you kicked yourself for not considering the disastrous possibility. 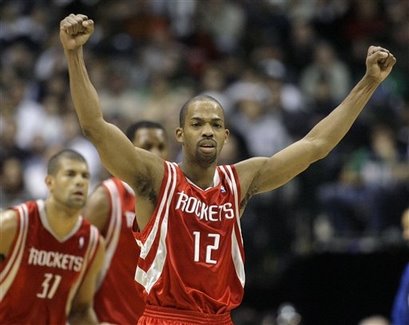 Rafer Alston took the last shot of the game.  *Click*

And it wasn't like it was a kick-out from Yao.  It wasn't even a wide-open layup.  It was a Rafer, an ugly floater over two defenders that had no shot in hell at going in.  It was a shot that Rafer had no business taking whatsoever.  "Well hold on a second," we thought to ourselves following the horrible shot attempt. "He got fouled.  He can tie the game with two free throws.  Easy enough, right?"

Wrong.  He missed one.  Then he missed the other.  And then I did this: 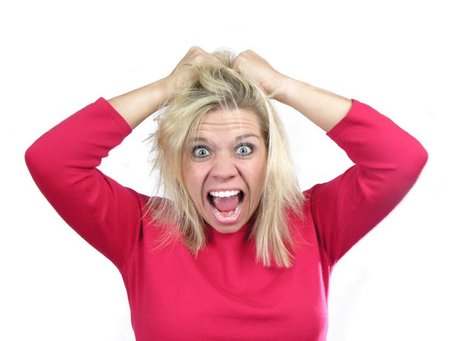 Or maybe that was after Yao shot a two-pointer with three seconds left when we were down by three.  But let's not get too far off the subject; Rafer Alston sucks.

Von Wafer -- Hawk was a scoring champion tonight, going 10-14 for 23 points.  And he did it against Kobe Bryant, who some consider to be one of the top defenders in the NBA.  Whenever Von was in the game, it seemed like we had an answer to Kobe, someone who could make any open shot on the offensive side of the ball.  In addition to scoring at will, Von also had two steals.  Another solid game from...(shamefully succumbing to reader requests)..."Baron Von Wafer."

Carl Landry -- This is why the Bobcats offered Landry 3 million bucks to start for them.  He has refined his offensive game to the point that we can feed him the ball down low or kick it out to him for a jump shot and expect him to put it in.  He absolutely owned the Lakers vaunted front court, scoring 21 points and grabbing 8 rebounds in 30 minutes.

Yao Ming -- I know he lost his mind on the final play of the game, but the guy had a fantastic game, and there's always Rafer to blame for the poor ending.  Yao filled up the stat sheet in points (19), rebounds (17), assists (5), and blocks (3), but unfortunately, he only shot one free throw.  Yao was fading away a lot tonight, but one free throw?  You can't waste 88% like that.

Dikembe Mutombo -- Deke came back to Toyota Center for the first time this season, and he recieved a standing ovation upon entering the game.  In four minutes of play, Mutombo was 2-2 for 4 points and snagged one rebound.  But stats aside, it's great to see Mount Mutombo back in a Rockets uniform.

Kobe Bryant Protection -- I know he's Kobe, and I know that he'll get preferential treatment game in and game out ; nobody needs to school me on that.  But this was just ridiculous.  There were fouls called on Kobe 3 seconds after the whistle (including another infamous Scola Phantom Foul), and fouls called on him when he lost the ball and threw his arms in the air.  In addition to that, Yao took a perfectly good charge in the first half and didn't get the call.  Why, you might ask?  Kobe Bryant was the one who drew the block.  Protect the guy if you must, but at least make it look like it's somewhat fair.

Yue vs. Yao Matchup -- This was quite a let down; Sun Yue only got two minutes of playing time.  What a shame.

Brent Barry: Only Rocket to have a positive +/-

Aaron Brooks: Shot 2-10.  Maybe Adelman used this as an excuse to put Rafer back in at the end?

Godzilla Moment of the Night:

Yao went Godzilla on a baseline advertisement sign and kicked the crap out of it.  Just walked up to it and attacked it out of anger.  It earned him a technical, but whatever, at least Yao was angry.

To quickly break down the last three plays of the game for those that didn't see.

1. Kobe Bryant takes the ball up the court and receives a screen.  But he doesn't take it; he pulls up and does this:

Can't blame it on Battier; it was simply a great shot.  As for the second part of the video, it takes care of play number three.

2. Rafer Alston takes the ball in bounds with about 27 seconds left.  The first mistake he makes is that he dribbles off about 10 seconds of the shot-clock, gets it to Landry, then gets it back and dribbles a little more, leaving him with no choice but to drive in and throw up a tear drop.  Had Rafer gotten the ball to Yao Ming earlier in the possession, the Rockets would have had the guy they wanted with the ball, along with extra time to pass it out to a shooter if Yao was double or triple teamed.  Bad play by Alston, to say the least.  He had no business taking that shot.  And then he missed those free-throws.

3. Aaron Brooks receives the ball in the corner under pressure, which is already a bad place to begin the play.  With about 5 seconds left, he passes it to Yao, who, instead of passing it back out to Brooks or another open shooter, decides to take a fade-away jumper...with the Rockets down by three.  Poor decision by Yao, not entirely Rick Adelman's fault.

Win-at-Heart?  We were without T-Mac and Rawn, and we lost to a fully-healthy (I don't count the Machine) Lakers team by only five.  Guess what: I don't care.  Had we been blown out, then maybe there would be some excuses.  But we played these guys close to the end.  I wanted to win this one, and we didn't get it done.

Next Game: Saturday vs. Miami Heat.  Let's show Dwyane Wade who the real injury machine is.  Did T-Mac get his own sympathy commercial?  I think not.