Share All sharing options for: The time has come: T-Mac trade options

I think we are quickly nearing the point of no return on Tracy McGrady.  Especially if the Rockets have any serious interest in signing Ron Artest this offseason.  Once again, thanks to the ESPN trade machine, I have constructed 4, yes FOUR, legitimate trade scenarios with the Chicago Bulls.

The Bulls have Derrick Rose, so acquiring Hinrich is the primary goal in any of these deals.  See for yourselves:

Bulls may not be ready to dump Nocioni AND Noah just yet, so... 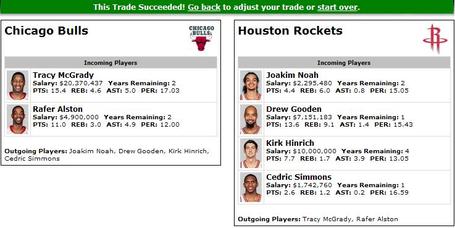 Simmons is thrown in to make the salary cap stuff work.  Drew Gooden has an expiring contract.  It could work. 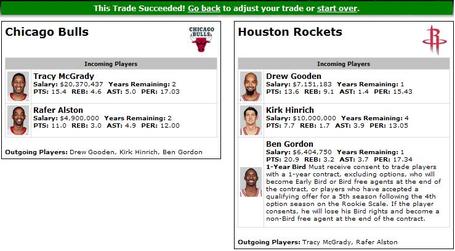 Gordon would take convincing.  Then again, playing with Yao and Artest should be the kind of trade that sells itself.  Gordon is a weird dude though.  But at least he can make free throws.  Unlike Rafer. 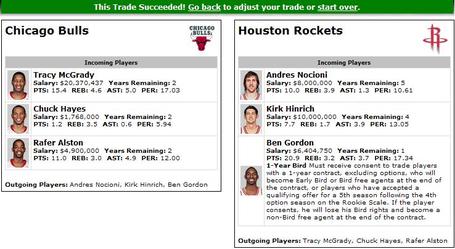 This one is a little less likely... the Bulls have Nocioni signed somewhat long-term.  But they may concede such a deal if they are able to get rid of Hinrich and Gordon at the same time... it could work.  These are at least reasonable scenarios.  And it would rid us of Rafer, too.  Double bonus.

Anyone have any other ideas?  This is all from 5 minutes on the trade machine... before I got my morning coffee.