How to Take Care of Business...Courtesy of the Spurs

Share All sharing options for: How to Take Care of Business...Courtesy of the Spurs

Stop me when this sounds familiar.  Kobe Bryant, down by one, hits a long three-pointer to give his team the lead with little time remaining.  All the Lakers have to do is get a stop on defense and the game is theirs.

Sounds kind of like what happened Tuesday night in Houston, doesn't it?  And in that game, the Rockets failed to return Kobe's favor after Rafer Alston missed two free throws that could have tied the game.  The play itself was also a disaster and resulted in Alston driving to the hoop and throwing up a lob.  Our late-game execution killed us, at least in those last 30 seconds.  Even the Battier three was somewhat of a lucky play. 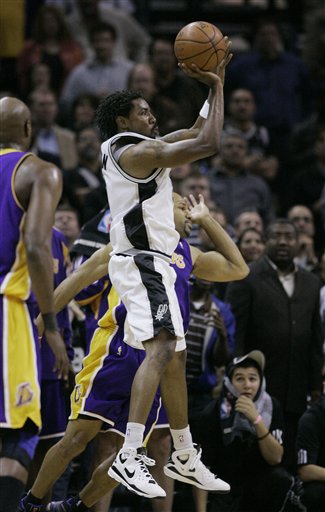 Back to San Antonio.  The Spurs inbound the ball to Roger Mason, probably their last option on the inbounds, with ten seconds left.  Derek Fisher gambles on the play, allowing Mason some free room to shoot.  He pulls up, is fouled by Fisher, and makes the shot.  Not the greatest execution of a play, but it ended up being a good look at the basket by a very good shooter.  Now all Mason had to do was make the free throw.

Unlike Alston, Mason stepped up to the charity stripe and made his shot.  Free throws, free throws, free throws; they're always instrumental at the end of the game, and it was no different on Tuesday or Wednesday night.  It was the deciding factor for the Lakers on both nights - they could have easily won both games or lost both games.  But because Mason made his free throw, the Spurs took the lead.

That's about where the similarities end.  San Antonio played good defense in the last 10 seconds and forced a turnover by Trevor Ariza.

Now I'd be the last person in the world to give the Spurs any kind of praise, but in this case, their ability to execute down the stretch separated them from the Rockets.  Does it mean that Houston can't beat the Spurs?  Of course not.  But more often than not, the Spurs will win games at the end that Houston may or may not win.  Most likely, it's due to an uncommon cohesiveness that San Antonio has from playing with each other so long.  The Rockets don't have that luxury.  But if we want to win more games in the upcoming second half of the season, we'll have to do what the San Antonio Spurs did last night.