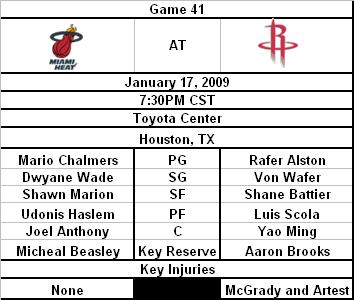 Point Guard
Alston - You suck, ya jackass
vs.
Chalmers - How exactly did they get this guy so late in the draft? Further proof that talent evaluation is a joke
Edge: Heat

Shooting Guard
Wafer - What more can I say? He's been better with Tracy out than Tracy has been when he's been in. Let's not fool ourselves though, McGrady is clearly the better player by a wide margin. Von has just done everything the team has asked of him, even the stuff no one expected him to be able to achieve.
vs.
Wade - As hard as he plays, as much as he gets his team in games and keeps them in games, he's playing with a bunch of underachievers. Eventually that will wear on him. Either that or something will click with his teammates and the top 4 East teams will be better than the top 4 West teams in every way
Edge: Heat

Small Forward
Battier -
vs.
Marion - I can not rationally talk about The Matrix because I am too big of a fan of his hideous shot that somehow goes in. He should be much worse, yet much better than he is, if that makes sense
Edge: Heat

Power Forward
Scola - The referees took him out of a game where he was severely outplaying "Star" Pau Gasol. That's all I have to say about that
vs.
Haslem - I've always liked this guy, I wanted him badly when trade rumors were going around a few years back. Now he would be third on our power forward depth chart. That is good news for me
Edge: Rockets

Center
Yao - Again referees took him out of a game he was dominating. Again Yao doesn't get that he isn't allowed to take charges. Hopefully Dikembe will teach him that once and for all
vs.
Anthony - Wait, the Heat start a 6'9 center? Uh oh
Edge: Rockets

Key Reserve
Landry - Landry has stepped up seamingly every time this year that Scola could not. I could not be more happy with how he has played as of late. It hasn't always been with points, but his hustle is really big for the second unit.
vs.
Beasley - Really should be the starter, but I get the idea of bringing him off the bench. He can run with the second team and really get his points. It's a smart move.
Edge: Heat

My Prediction: Her'es the funny thing. In my above Edges I gave 4 of 6 to the Heat, yet the Rockets will win this game. I'm thinking by a healthy margin in fact. Just goes to show, individuals don't win basketball games.