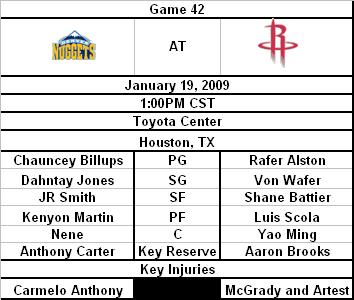 Point Guard
Alston - I have to ask, as effective as Aaron Brooks was in the last game, why wouldn't you start him against Billups again?
vs.
Billups - He has personally turned this team into a contender. They always had the athletes, they needed the brains. Billups is more than they needed in that department.
Edge: Nuggets

Shooting Guard
Wafer - He's the real deal. And yet again, for the last time, I have to admit that I wanted DJ Strawberry more. Mr. Wafer, I apologize
vs.
Jones - I don't understand why he's the starter. I get that Carmelo is out, but even before then he was starting over Smith. Is it just a chemistry thing? He's not a bad player, but he's not a good one either.
Edge: Rockets, there, I finally bought all the way in

Small Forward
Battier - Looks like his old self again. The rest clearly helped him heal. Can that happen with Artest and McGrady? I sure hope so
vs.
Smith - I have a soft spot for freak athletes that while they may not always keep their head in the game, they are always showing you that they are a freak athlete.
Edge: Rockets

Power Forward
Scola - Quietly either dominating, or being forced out of games without getting the chance thanks to officials that for some reason referee him differently than other international players. Maybe he needs to start flopping
vs.
Martin - Lamborghini skills, Pinto mentality. I always want to like this guy, but just can't.
Edge: Rockets

Center
Yao - The Nuggets have the capability to give him fits. I've seen something in him the last few games though, they won't be giving him fits in this game. He's figured out how to play the front, that's why you keep seeing less and less of it.
vs.
Nene - Copy cat! Yao's the only one to get his name like that on his jersey!
Edge: Rockets

Key Reserve
Landry - He's going to be HUGE in this game. He can run and jump with the Nuggets and he will take advantage of that
vs.
Carter - Just hanging around, hanging around, he has alligator blood
Edge: Rockets

My Prediction: Rockets by 1 on a late shot by Von Wafer