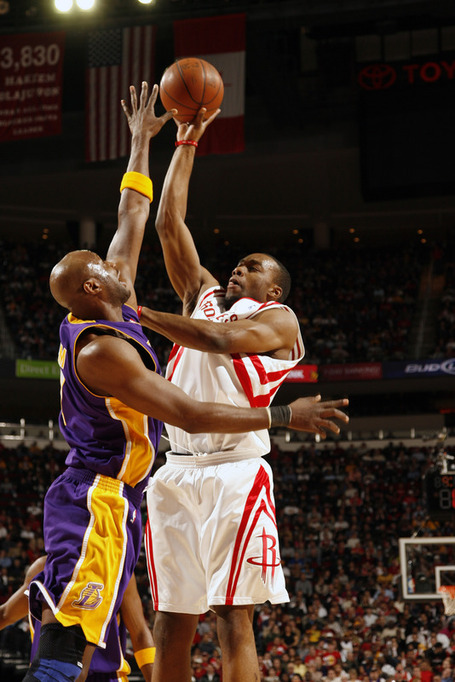 It's midseason review time, so if you've missed the entire season thus far, here's your fix.  I've decided to split mine into three parts: two parts consisting of player, coach, and team evaluations, and then a third part dedicated to looking ahead to the second half.  Keep in mind, grades reflect individual play, as opposed to simply "who is better."  Enjoy.

There's not much to hide here: we at The Dream Shake do not like Rafer Alston.  He kills us, absolutely kills us sometimes.  In case you don't know, here's what irks me about Rafer's game:

As for this season by itself, Rafer has indeed had one of the worst years of his career.  Despite that, Rafer can still get hot at times.  He had a stretch of games in which he shot over 40% from the field and 50% from three.  And we can't forget the numbers he put up in Cleveland: 20 points on 8-11 shooting.  But in the end, Rafer just isn't very good, but it looks like he's going to stay the starter for now.  Just hope and pray that something good can come from him.  Grade: C-

To start, you may reference this post that Dave had earlier this year.  It's tough to judge how good or bad Rawn has been at this point in the season because he's been banged up all year.  I guarantee you, had he not suffered that ankle injury, he'd be making more than 35% of his layup attempts.  But ankle aside, Ron has been a solid addition to this team so far in the season.  He is third on the team in +/-, has been a great defender even with the bum ankle, and has hit an astounding 42 percent of his three-point shots, something that I wasn't expecting to see out of him.  But my favorite part about Ron is the passion that he brings to the Rockets.  He'll go down for lose balls even after the whistle has blown.  He gives referees slaps on the ass, he runs into the stands (got to be careful there!) to give fans high fives, and when he decides to play through the pain, he isn't just an empty jersey; he goes all out as if he were healthy.  I love what Ron has brought to our team, and once his ankle heals, he and Battier will finally be able to wreak havoc on the NBA.

The only problem I have had with Artest is his tendency to make extremely odd and/or disastrous decisions on offense.  Sometimes he will catch a ball in stride, and instead of shooting in rhythm, he will dribble for a second, thereby losing any rhythm that he had, and then chuck up a prayer.  This might explain why he's shooting a lowly 37 percent from the field.  Additionally, he will go one-on-one quite a lot, and with that bum ankle of his, he hasn't been able to go by many defenders.  However, more often than not, he will make up for it on the defensive side of the ball and force a turnover.  His frustration fuels him, and as long as he keeps playing hard, there's not much more we can ask from him.  Just got to get him healthy!  Grade: B+

Bones has had an up and down year.  He started off looking extremely rusty and just wasn't ready to play night in and night out.  But since he returned from injury, Brent has picked it up and has become one of our most reliable three point shooters.  He's going to start playing around 15 or more minutes per game now with Tracy and Artest out, so hopefully he can keep it up.  We brought him in here for two reasons: to shoot and to be a veteran leader.  So far, he has shot very well.  And with my limited access to the team, it's hard to tell how much of a leader he has been.  Maybe he can talk everyone out of spilling so much information to the press.  Except to us, of course.  Grade: B

There's not much more to be said about Battier that hasn't been said.  He won't fill up a stat sheet, but he'll make a good percentage of his three-pointers and will shut down opposing star players.  And of course, you'll see him draw a charge once or twice every game.  Shane has been injured for a good part of the season, and his shot has been a bit rusty.  Normally, you'll see him go down into the post and use his jump hook when he is matched up on smaller defenders.  But it hasn't worked for him as much this year, and he just needs more time to make things click.  His defense has not slowed at all, and he continues to do all of the dirty work as long as it helps us win.  Grade: B+

Aaron has improved a lot since last season, and he got off to a great start this year.  Over the first quarter of the season, he was shooting threes at around 40%, was a lightening rod off the bench, and was taking opponents by surprise as a legitmate scoring threat.  Then, as Rafer sat out with an injury, Aaron guided the team to four straight wins as a starter.  He played fantastic defense in some games, and shaky defense in others.  But for us to win those four games was huge.

Then something happened to Aaron, right about when Rafer came back (coincidence?).  He got in a funk, a slump, or whatever you wan't to call it.  As he started to miss more and more shots, he lost a lot of confidence and began to pass up good looks.  During Aaron's slump, we lost four of five games, which goes to show how important he is to our team.  Recently, he has found his stroke again and scored in double-digits in three consecutive games.  And by the way, we won all three of those contests.  It will be interesting to see how Aaron further develops as the year goes on, but at this point, we've seen a lot more good than bad.  Grade: A-

Besides a ferocious gorilla dunk in Jersey, there's not much to say about Joey this year, so I'll let him tell you how it's been.  We probably won't see a lot from him this season, but it wasn't like we expected to anyway.  Grade: Incomplete

Chuck's numbers have dropped considerably this season, and as a result, he is seeing less minutes per game.  As much crap as we give Chuck about his offensive woes, he still managed to shoot 50 percent each of his first three years in the league.  But this year, he's down in the 30s.  His rebound numbers are down, his FT's have somehow gotten worse, and to start the season, he was even slacking a bit on defense.  However, Chuck has stepped up his defense of late, most notably when he put the clamps on Kevin Garnett in Boston.  With Carl Landry improving by the day, Chuck's time with the Rockets may be over the hill, but he can still make an impact on the defensive end no matter how many minutes he plays.  Grade: C

There's no other way to put it: Luther Head has been a disappointment.  He was once a promising two guard with a great three-point shot, but he just hasn't made his shots over the last year and a half, and when a shooter isn't shooting, it will be hard for him to find a job.  Hopefully we can move Luther to another team instead of cutting him, because if he keeps bricking like he has been, that might be our only option.  Luther had his chance to step up, but as he missed open shots, Von Wafer made his.  As a result, Von is a starter, and Head fights for minutes.  Who knows, maybe he'll find his stroke again, but it doesn't look like it will be with the Rockets.  Grade: D

Thank the Lord that Landry didn't go to Charlotte, because he's been a key player for us off the bench this season.  He's improved every area of his game, whether it's rebounding, defending, or his jump shot.  His free throws have also improved significantly - he's now shooting in the 80s as opposed to the 60s.  He's playing 5 more minutes per game this season than last year, and it's definitely merited.  The one question that people will have about Carl is if he has enough of an offensive arsenal to play 30 minutes per game.  It remains to be seen if Carl can start for a team, but at this point, we don't need him to.  As long as he continues to put up the numbers that he has so far, there's not much more we can ask of him.  Grade: A-

Part 2 will be up in the next few days.  Happy MLK day to all.