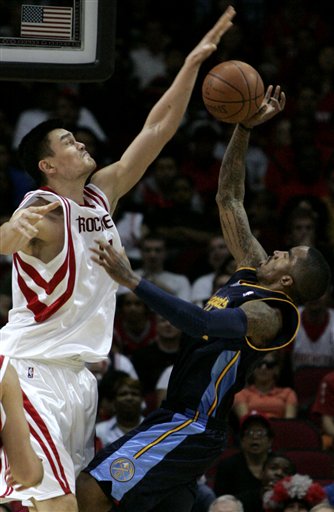 Despite terrible officiating (yes, this block was called a foul on Yao), the Rockets managed to pull out a 115-113 victory over Denver on MLK Day.

After a craptastic defensive effort in the first half, the Rockets managed to hold the Denver Nuggets to 45 second-half points en route to barely edging out a 115-113 victory without Tracy McGrady (surprise, surprise) and Ron Artest.  The Nuggets were also without their star player, Carmelo Anthony.  Despite some terrible officiating and a 4th quarter explosion from JR Smith, we were able to continually feed Yao the ball, which remains to be a brilliant decision game in and game out.  Kenyon Martin had a chance to tie the game at the end, but he missed both free throws.  On to the recap:

Yao Ming -- Shanghai's Finest had an oustanding offensive game, going 13-19 from the field for 31 points.  However, I do have to bag on Yao just a bit for grabbing a Bynumian 3 rebounds in this one, which was actually one less than his number of assists (4).  He also had 6 turnovers.  But who cares, we got the win.

Luis Scola -- El Conquistador went 16/8 and practically brought us back into the game by scoring 4 straight baskets at one point.  His defense also picked up in the second half.

Rafer Alston/Von Wafer -- Refusing to give Rafer too much credit, I have decided that both he and Von will receive their ups.  Each scored 18 points, and while Von didn't have it from three today, he still shot 7-17 and had three steals.  He also helped D up Chauncey Billups, holding him to 3-12 shooting.  Rafer also played good defense on Billups and had double-digit assist numbers for the first time since Feburary 22nd of last season.  And even better - no turnovers! Maybe tonight's referees weren't in the best spirits to work an NBA game.

Officiating -- Bennett Salvatore, Pat Fraher, and Violet Palmer?  Who the hell put those three together?  Whatever the case, it was a terrible game for the referees on both ends of the floor.  Chris Andersen raped (for lack of a better word) Yao Ming in the post, and yet Yao was called for a travel.  Yao then swatted JR Smith after being a good foot away from him and was called for foul.  To echo Denver's probable sentiments, I can't remember the last time I saw a charge called at the end of a close game.  And late in the fourth quarter, Rafer Alston took about five steps before dribbling across half court.  It's been a long time since I've seen a ref's actions so obviously wrong: 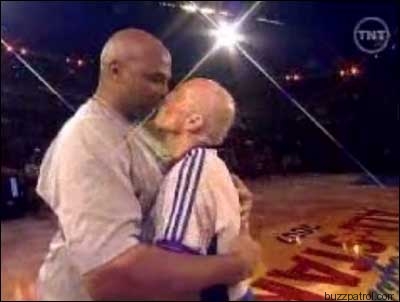 Shane Battier -- He just didn't have it today.  He got lit up by J.R. Smith, and his threes weren't falling late.  It happens.

Interior Defense -- 50 points in the paint for Denver, and most of them came in the first half.  There was one point in the game in which Denver had three straight uncontested dunks.  Luckily, we managed to fix it.

Stats of the Day:

Quotes of the Day:

I'll let Bill Worrell and Clyde Drexler take this one.

Clyde: When I was in the bathroom at halftime, I overheard Coach Adelman giving the Rockets a piece of his mind.

Bill: And that's where Clyde gets a lot of his scouting done, in the restroom.  He's an undercover Nugget.

Bill: This is the worst defense...the most layups I've ever seen a team shoot.

Clyde: Maybe [Kenyon Martin and Luis Scola] have got a pact.  You don't guard me, I won't guard you.

Clyde: These officials, to say they're below average, that would be an understatement.

Next Game: Wednesday vs. the Utah Jazz.  I have tickets and am prepared to start the "Utah Sucks" chant as often as possible.